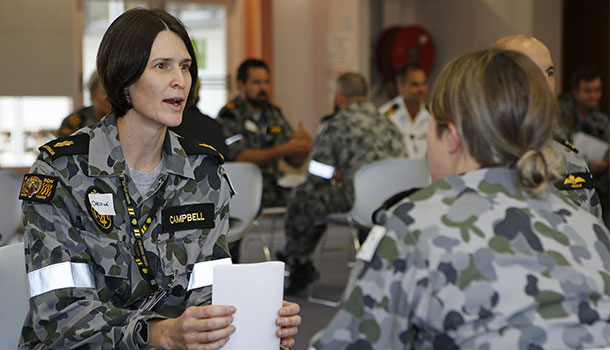 Free or low cost MBAs are being offered to women working in senior management in business and in government.

Macquarie Graduate School of Management (MGSM) is putting up $4 million to secure places for 100 ambitious, talented women managers with the aim of helping some of them take the final step to Chief Executive level.

The course is aimed at middle-managers with three to five year’s experience who are gunning for more senior positions. Twenty-five women have signed up so far, including one from the Australian Navy and other government clients are also expected to come on board.
MGSM Dean Alex Frino said the government sector was “definitely interested” in the program.

“Because of the small percentage of women in business and the potential contribution that women can make in leadership positions is understood across the board.”

Professor Frino said that women only represented about 20 per cent of senior managers.

“Underrepresentation is ubiquitous across both the government and non-government sectors,” Prof Frino said.

Governments or businesses that put women forward for the MBA must chose women who have a good case for fee help, they must commit to supporting their candidates during study, e.g. by offering study leave, and have a career path mapped out after completion of the MBA.

A caveat is that organisations applying must have an annual turnover of $100 million and match fund up to half the cost of the degree ($65,000), which many people complete part-time over four years. So far, every organisation involved has contributed the maximum amount allowed of $35k. The minimum is $10k.

Professor Frino hopes eventually to fund 200 women to do the School’s MBA to achieve gender parity within the 1500 course students.
He said MGSM research with 120 women highlighted the barriers to doing an MBA.

“When a female gets to an MBA-ready level she’s [typically] in the 25 to 35 age group and a lot of women in that group leave the workforce for family reasons and that has two effects: first, it reduces the income available and second they lost eh tax deduction effect of study. Blokes employment is usually continuous.”

Prof Frino said two factors conspired to hold women back from doing an MBA: the probability of getting a job afterwards because women were so underrepresented in senior management ranks and the rate of return on their investment.

“We are trying to attack both cost and the rate of return so we need buy-in from employers to support women’s career prospects [after the course].”
Asked how an MBA helped women climb the management ladder, Professor Frino said the course focused on developing “soft skills” alongside more conventional skills.

“The focus in an MBA is unlike other technical degrees in that we focus more on soft skills, like leadership, working with teams, psychology all in the management context but also on accounting, fiancé, marketing, negotiations, theatre and public speaking.”

He quoted Financial Times research that showed managers taking MBAs doubled their salaries three years after finishing the course.
Another major advantage of an MBA was to help people take the last step to a Chief Executive position.

“I think that’s the hardest of all because of the scarcity of those positions. The person who is at CEO level is probably doing more than just managing people; they’re fundamentally responsible for all facets of the business, they have got to have the knowledge about everything: finance, HR, strategy, marketing.”