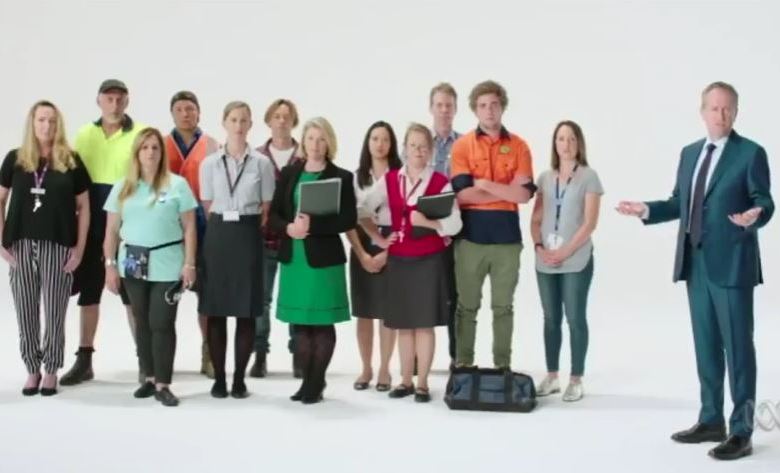 A shiny-suited Mr Shorten fronted a television ad previewed on 9NEWS on Sunday night, shown only in Queensland and appearing to pander to Pauline Hanson’s support base or persuade swinging voters.

It featured the Trumpian slogan “Australia First” and attacked 457 visas and overseas workers.

But trouble erupted after viewers noticed that of the twelve people in the ad supposed to represent Australian workers and variously decked out as tradies, admin staff and medics, only one was not white: an Asian women.

Mr Shorten says in the ad: “A Shorten Labor government will build Australian first, buy Australian first and employ Australians first”, echoing the ads rather sinister undertones of the White Australia policy from the 1950s and 60s.

Labor copped it on on social media yesterday with many people levelling accusations of racism, which Shadow Treasurer Chris Bowen conceded was “appalling” but underlined it was a “rare misstep” for the Opposition leader on Lateline last night.

One Facebook commentator said: “In this increasingly divisive “us & them” world, political campaigns like this peddle peoples’ prejudices when they should be challenging them.”

Another added:  “Is he trying Trump’s strategy? Attempting to appeal to the overwhelming number of redneck Australian voters that deep down really believe they are ‘owed’ something for having lighter skin.”

However, others waded in to defend the Labor leader on social media.

One person said: “Everyone tries their best to be offended these days, they call anyone who disagrees with them ‘racist’ so the word has lost all credibility now, and when something is genuinely ‘racist’ everyone ignores it, it doesn’t take much to cause a race storm in a teacup these days, you can thank political correctness for that.”

It later emerged that it was highly probable that Mr Shorten’s office had seen and approved the ad before it aired. Mr Shorten himself would not confirm or deny this but called criticisms of the ad “a fair cop”.

Meanwhile, Senator Sam Mr Dastyari caused his own social media storm after he hopped on board a Bill Shorten campaign bus to travel to three of Sydney’s outer suburbs and bemoan what $1 million buys in the city’s overheated real estate market.

In the short film, which went viral, Mr Dastyari holds up examples of seemingly undesirable homes or locations which nevertheless attract a million buck price tag.

He says: “Everyone loves talking about house prices but what does a million dollars in Sydney actually buy you? Not much.”

In the northwest suburb of Ryde he stands outside a house and says:  “Immaculately kept, as it’s been told, and on one of the busiest roads in Sydney, to boot.

“And you know if it’s got security shutters you’re onto a good thing”.

The film then cuts to a vacant block in Toongabbie.

“People like to talk about how a generation of young people are being picky. We are an hour and 20 away in peak-hour traffic from the CBD of Sydney and all a million bucks will buy you is essentially a block of land across the road from not only a power station but also the train line.”

A scene filmed in Northmead is just as bleak, as Mr Dastyari sits atop a pile of furniture left out for kerbside collection to deliver his next tirade.

“This is what a million dollars will buy you in Northmead but it’s ok because it’s described as having a functional kitchen. For a f—ing million dollars you’d like to think the kitchen would work,” he says, before piling old furniture into the campaign bus.

“If you gotta save a million bucks, you gotta be prepared to be a little bit frugal.”

He goes on to calculate that a $1 million mortgage for a modest Sydney home would mean $1050 a week in repayments at today’s interest rates and if these went up by one per cent repayments would increase to $1200.

But the video led to some viewers accusing him of snobbery and of ridiculing people’s houses while others criticised him for not offering a solution to the problem.

“Seriously, imagine if that was your house and some halfwit stood outside it critiquing what you’d worked your whole life for,” said one.

“This is offensive. Running around disrespecting peoples’ homes. And who hasn’t salvaged furniture from the street? @samMr Dastyari is a snob” said another.

However, others praised him for highlighting the affordable housing problem.

“Sam, it’s about time someone said the truth, the real estate agents have not only auctioned our homes to get higher prices, but they’ve auctioned our dignity away, and you’re bloody right, a million dollar house should have a fully functioning … EVERYTHING… you said what we’ve all thought.”

Mr Dastyari said that it was never his attention to upset anyone but to shine a spotlight on housing affordability.

“If it takes me swearing on Facebook to draw attention to housing affordability, then I welcome it,” he told news.com.au.

Mr Bowen made reference to Mr Dastyari’s “edgy communication style” on Lateline last night but did not criticise the video.