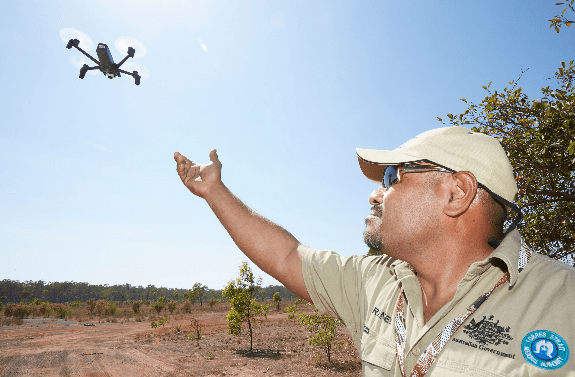 Troy Laza sets a drone in flight at the Indigenous Rangers Forum.

Hundreds of Indigenous land rangers from across Australia descended on the Cox Peninsula in the Northern Territory to learn the latest cutting-edge land management techniques including how to launch drones to monitor sacred sites.

In the rugged upper stretches of the Northern Territory in Kenbi Land, located between the Cox Peninsula and Bynoe Harbour, the traditional owners have for centuries been using their knowledge to nurture the land.

But it wasn’t until 2016, after a 36-year fight, that the traditional owners had 52,000 hectares of land stretching from the peninsula through to the upper islands and reefs of the region restored to them, a move which has given them greater oversight of the land and enabled them to better protect sacred sites.

It’s here that more than 400 Indigenous rangers from over 60 different ranger groups across the Northern Territory, Western Australia and Queensland gathered last Thursday to share and gain knowledge at the Indigenous Ranger Forum.

The three-day forum, an initiative of the Northern Land Council and the Federal Department of Agriculture, was aimed at educating rangers on the latest in biosecurity techniques including learning how to launch drones, undertake microplastic sampling, turtle monitoring, crocodile management and more.

The forum came just a month after the NT Government officially recognised the importance of the Indigenous people and their  knowledge of the land by recognising Indigenous rangers under special conservation laws.

The event opened with a special welcome to country, with traditional owner, Zoe Singh, inviting attendees to the ocean for a ceremony.

“We’d like to greet you at the beach for a welcome to country by wetting your head with saltwater. Our ancestors know you’re on our country and look after you while you’re here,” she said.

For the locals, protecting their sacred land is “the most important thing” that is done on country, says Northern Land Council chairman Samuel Bush-Blanasi.

“Country is important to us, especially when we’re talking about sacred sites from the sea to the land,” he said.

For many, the highlight of the forum was a workshop which saw rangers learn how to use aerial drones to monitor land, improve compliance and manage risks such as erosion and biosecurity issues.

The drones enable the rangers to have remote oversight of the land and, in particular, to monitor sacred sites.

Mardbalk ranger Nicholas Hunter said he would take many of skills learned from the forum back home to the Goulburn Islands off the coast of Arnhem land to share with his colleagues – in particular, the value of drones in managing biosecurity risks.

“Using drones can save a lot of time and help with safety, for example if you’re fire burning you wouldn’t want to get trapped in an area where someone has been burning. You can send the drones in to check and they can take video shots or do live feeds,” he said.

“Also for protection of sacred site areas and ceremony grounds, drones can be useful.”

One thought on “Indigenous rangers use drones to protect sacred sites”