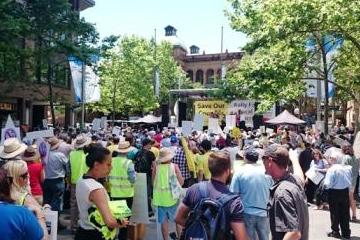 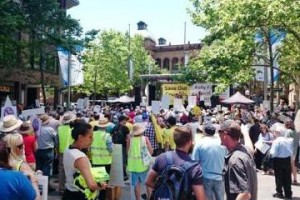 Today is the deadline for 87 of the state’s councils to resubmit proposals that State Premier Mike Baird has said must include plans to merge with at least one neighbour.

The anger brewing in local government was on full display, with Holroyd Mayor Greg Cummings – whose Sydney council is fighting off a merger with Parramatta and Auburn Councils and did not submit a merger proposal – sending a blunt message to the Premier Macquarie Street.

“Mike Baird said we have had four years of consultation. Has he talked to you? Four years of talking to himself, more like it!

Mr Cummings argued that a council’s size was not relevant, “it’s about the quality of the people in it and their commitment to the community.” 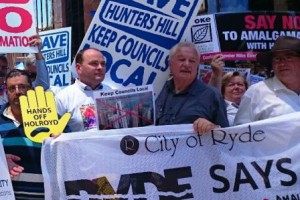 Save our Strathfield campaigner Nella Gaughan had a message for the NSW government, many of whom were presumably sitting in their offices just metres away.

“Back off, Mr Baird. Give up Mr Toole. You can’t win the fight. We will keep fighting and we will win,” Ms Gaughan said.

“Mike Baird is trying to bully our councils into signing up for amalgamations that no-one wants and no-one needs.”

She said there was only one reason for the government’s merger push: “to look after their developer mates and ride roughshod over local opposition [to development].” 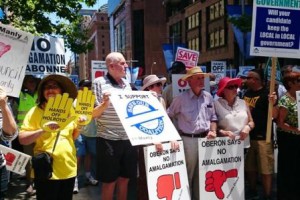 Local Government NSW President Keith Rhoades was also in fighting form as he addressed the crowd, many of whom were waving placards and shouting “bullshit” at opportune moments.

He said forced council mergers would mean the loss of local representation at “the only level of government where you can talk to your local councillors.”

He called the process “a charade and a sham” and said the State government should fix funding to local government first.

Mr Rhoades later told Government News that the NSW government had promised to issue a statement in two weeks but he had not been told what this would cover. 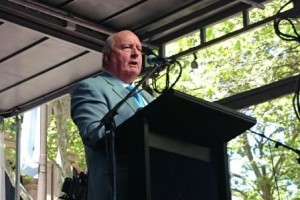 Shock jock Alan Jones delivered a speech while brandishing correspondence from ex-NSW Premier Barry O’Farrell and an old petition against amalgamation from Evans Shire Council – where Mr Toole was a former councillor – which he said showed both men had committed themselves to there being no forced council amalgamations.

Evans Shire Council was forced to merge with Bathurst in 2005 and Mr Toole became mayor of the new Bathurst Regional Council.

“Paul Toole is bullying and intimidating councils to do the very thing he promised would not happen,” Mr Jones said.

“There are so many people who want to pussyfoot around the truth. I’m sorry to say it but … it’s clear that the government of NSW has been lying to the people of NSW. It’s there in writing. I’m only citing their words.

“I don’t think the people of NSW take kindly to politicians who tell conspicuous lies.”

He told the crowd to “be brave, be resolute. This mob are backing off.”

But it is difficult to know whether the NSW government will, in fact, back off.

Legal opinion appears to differ as to whether or not the government has the power to sack councils and force them to amalgamate and the smooth passage of any legislation in the Upper House is unlikely, given opposition from Labor, The Greens, the Christian Democrats, the Shooters and Fishers and independents.

Other options, including reconvening the Boundaries Commission and holding further public consultation, do not look much brighter for Mr Baird.

The Independent Pricing and Regulatory Tribunal’s (IPART) Report on whether councils were considered Fit for the Future was made public a month ago. The report declared that 60 per cent of NSW councils were ‘not fit’, many because they were not large enough, despite being financially sustainable.

Premier Mike Baird and Local Government Minister Paul Toole gave those council’s deemed ‘not fit’ by IPART (and that the 2013 Independent Local Government Report had recommended should merge) one month to put foward a merger proposal to the government, hinting darkly at the consequences.

Many councils have publicly refused to do this including Holroyd, Liverpool, Woollahra, Cabonne, Mosman, Oberon, Ryde, North Sydney and Strathfield but others, such as Leichhardt, Marrickville, Ashfield, Gosford and Wyong, fearing they could be sacked and administrators appointed, have submitted new proposals.

Some councils have reluctantly agreed to merge so they do not miss out on the government’s merger incentives, which includes money towards the costs of amalgamating, access to cheap loans and extra cash for community infrastructure, benefits which the government has said will not flow to those councils that miss today’s deadline.

A handful of councils have already backed mergers, including Parramatta; Canada Bay, Auburn and Burwood; Randwick and Waverley; Young and Boorowa, and Cootamundra and Harden shires.