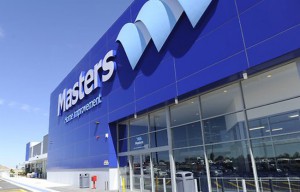 Shoppers might be voting with their feet over the price, quality and variety of the Woolworth’s food and grocery range, but Australia’s peak lobby group for property developers, Urban Taskforce, has a very different take on what the real problem eating out the Fresh Food People’s profit margins is: the government, and the paucity of store locations in New South Wales available for the struggling Masters Home Improvement business.

It’s good to know someone has sympathy.

Just as Woolworths’ chief executive Grant O’Brien fell on his sword this week after another profit downgrade, the property development industry has weighed-in and claimed that retailers like Woollies and Masters are suffering because of the the dead hand of government — especially in the Premier State where Urban Taskforce claims current planning and zoning system hasn’t just slowed down the roll out off huge new megastores, it’s also choked the availability of new sites and is hindering customer access and creating traffic snarls.

They clearly have more sympathy than shareholders or councils.

“Due to the restrictive land use zones of the NSW planning system, there is an undersupply of appropriately zoned land to accommodate stores with a large floor plate, such as Masters. This is leading to a restriction on the location of outlets therefore reducing customer access. These restrictions are only leading to more car usage across metropolitan Sydney as customers have to travel longer distances to purchase goods.”

The ‘car park crush’ argument may have some merit, but it also highlights a little known and highly speculative business line that retailers like Woolworths have previously been highly proficient in: land banking.

The process works by retail companies buying-up prime locations for new developments well ahead of announcing plans for store rollout, and then on-selling the commercial property at a sizeable profit after the store site is developed and then very profitably leased-back on a long-term basis to the business owner.

The practice is particularly effective at a balance sheet level because it builds and releases capital for new sites while putting property into the far more tax effective category as an operating expense.

The 2008 global financial crisis provided a bonanza for land bankers like Woolworths because the fall in markets and commercial property prices allowed cashed-up companies to snap up sites at a big discount.

At the same time, a flight to safety away from financial stocks buoyed staple retail equities and turbocharged their spending power.

But with Sydney property prices at record highs, the golden days of land bargains have been replaced by soaring competition for new sites that is placing price pressures on developers and retailers alike.

The bubble like property market, coupled with climbing population numbers has prompted Urban Taskforce pushing local and state governments for a rethink on zoning controls in NSW so that supply is less contsricted.

“Victoria has a much more flexible approach to where retail outlets can be located and NSW needs to catch up with this approach to reflect the changing market trends,” Mr Johnson said, adding that the rollout of Masters stores “throughout NSW has been significantly delayed as there are limited land use zones where bulky goods retailers or retailers requiring a large floor plate … are permitted.”’

A key difference is call-in powers for so called state significant projects. A major issue for Masters and planning authorities is that because it has so many things under one roof, the business straddles a range of business and land use classifications that range building supplies to garden centres and bulky good.

In planning terms, Masters just ticks too many boxes.

“The current NSW planning system has not adapted to accommodate innovative emerging business models such as Masters, whereas more flexible planning systems in Victoria and Western Australia have successfully allowed these retailers to enter the market, increasing competition and choice for consumers and encouraging investment and job creation in these states,” Mr Johnson said.

Woollies and particularly Masters’ frustrations with NSW planning and zoning laws are well established and date back to the 2011 launch of the home improvement chain in the state. Since then, it has struggled in terms of both profitability and wresting market share from market leader Bunnings. In 2012 Masters lodged a submission to the NSW government’s Green Paper on planning reform.

The paper warned that Masters’ property pipeline was “falling significantly behind” and that the state’s planning system “is presenting a significant obstacle.”