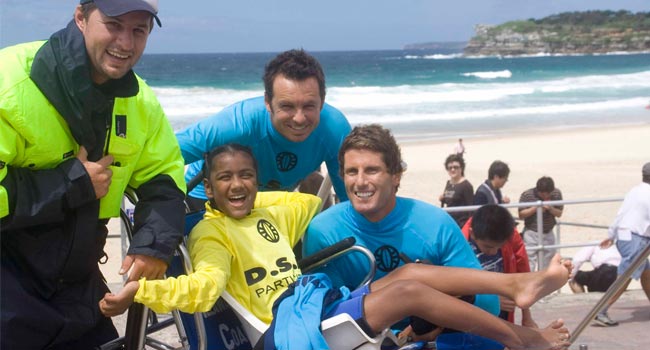 Local councils are wasting money trying to improve beach access for people with disabilities because they don’t talk to people with expert knowledge beforehand, says the Disabled Surfers Association (DSA).

DSA President Gary Blaschke said well-meaning councils sometimes went ahead and installed ramps or beach matting but they often chose the wrong beaches or used the wrong products because they did not seek advice from groups like the DSA first.

Mr Blaschke said disabled surfers did not seek out the most popular surfing beaches with the best waves, instead they looked for beaches with small waves, plentiful car parking and disabled toilets, ramps and beach wheelchairs. They also chose beaches where they did not inconvenience other surfers.

He praised the council and state government for wanting to improve beach access for people with disabilities but he said Caves Beach was not a good choice.

“I don’t think Caves Beach is the right beach. It’s very high impact [the waves are strong]. It isn’t a beach you can go for a stroll along the sand,” Mr Blaschke said.

“There’s only one disabled toilet, limited parking and they have nippers there on Sunday so it’s absolutely chock-a-block. If you get there late you’re parking a kilometre away and for a person in a wheelchair it’s just not on.”

Mr Blaschke said Blacksmiths Beach was a better choice because it had a lot more parking, better infrastructure and was more condusive to going for a stroll.

he said beach matting was “a fabulous idea” if it was carefully thought out and if it was put on an appropriate beach.

“Beach matting is a very expensive material. I really think there needs to be a bit of a moratorium on this. Local councils are going off and doing their own thing. Some beaches are not conducive to beach matting.” 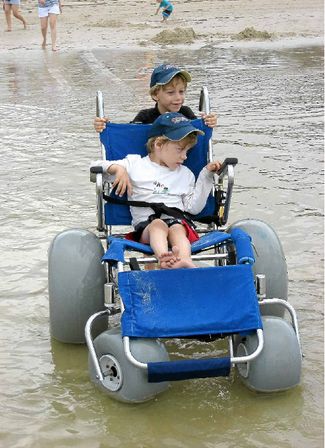 But a spokeswoman from Lake Macquarie City Council said Caves Beach was chosen after consulting widely with people from the Disabled Surfers Association and the Hunter Disability Network and other representatives from the ageing and disability sector as well as council lifeguards, Blacksmiths and Caves Beach Surf Clubs and qualified access consultants.

“Caves Beach was chosen because it has a well-defined and generally hard tidemark, the beach does not experience dramatic changes unless during extreme weather events, it is relatively sheltered due to the surrounding cliffs and it has the strongest reported patrols of the four Lake Macquarie City beaches,” the spokeswoman said.

More generally, Mr Blaschke said that it wasn’t just about local councils choosing the wrong beaches, sometimes the adaptations designed to get people onto the beach in the first place were badly thought out.

He said some ramps conformed to Australian standards but the gradient was wrong and they did not include features such as an area for wheelchair users to rest.

“Councils build things without understanding the standards. A disability access ramp is a minimum of a one in fourteen gradient with a handrail or one in twenty without one. It’s so important to get the gradients right because you can build something that may not be accessible.”

Mr Blaschke gave the extreme example of a long, steep zig-zagging path on Victoria’s Phillip Island, where an able-bodied person would struggle to push somebody in a wheelchair back up the path and a solo wheelchair user would be stuck on the beach, unable to get back up.

He cited Lakes Beach on the Central Coast as an example of the kind of beaches that should be chosen and the infrastructure that needed to be supplied.

“We chose it not because it’s the best beach in the world but because it has the world’s best disabled access ramp and 360 car parking spaces. If you’re going to say this is the beach for people with mobility or disability issues they have to be able to park there.

“Most beaches, Bondi for example, you’ve got limited parking or you’ve got to pay for it. There are issues that have to be looked at.”

Lakes Beach also has a drop-off area for cars, a cordoned off safety zone and tactiles on objects like handrails for the visually impaired.

He also singled out Collaroy Beach and Warringah Council for praise. The DSA held a huge surfing carnival on Collaroy last week which attracted 159 people with disabilities and 345 volunteers.

“[At Collaroy], there’s a pool with a ramp, several disabled toilets and the waves are very small.”

Mr Blaschke said councils and government at all levels needed to consider a myriad of factors when they wanted to make beaches accessible and to speak to people who knew what they were talking about before pushing ahead with projects.

“Just because you’re in a wheelchair and just because you sit on an access committee it doesn’t mean you understand what’s needed in a beach environment. It’s DSA’s thirtieth year taking people to the beach,” he said.

“I’m happy to speak to councils and to possibly write reports for them but 90 per cent say that’s not in their budget for the year. Perhaps next year or the year after.”

Surf lifesavers should have specific training in dealing with people with disabilities and disabled toilets should be locked so they weren’t vandalised (disabled people can still access them with a Master Locksmith’s Association Key or MLAK).

He believes a national or statewide strategy is needed to successfully open up beaches to every Australian, as well as to visitors who are disabled or elderly. It’s a strategy which he feels has massive potential, economically and socially.

“Really Australia should be leading the charge across all levels of government. About 32 per cent of the population [including the elderly or disabled] in most cases can’t get access to the beach. It really is becoming a big issue.”

Mr Blaschke said he had seen people on day release from hospital and people whose last wish was to be close to the ocean wheeled near to the ocean on boardwalks or ramps.

“You can see their body language change immediately. The therapeutic value of just being able to look at the ocean, to smell the ocean and to feel the breeze … it doesn’t matter if you can’t get onto the sand as long as you can get down to the beach and there’s some infrastructure there, if needed.

NSW Minister for Disability Services John Ajaka said the NSW Government s encouraged inclusion for people with disability, including access to some of the state’s most beautiful beaches.