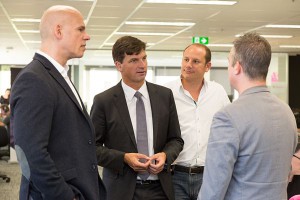 Businesses that gain accreditation to sell to one level of government in Australia could soon automatically have authority to sell to all of them – and without tendering.

Then don’t bother telling Angus Taylor, the Turnbull Government’s new Assistant Minister for Cities and Digital Transformation who says he’s all up for sheeting a big dose of disruption to not just the public service, but the thousands of businesses across Australia that government should buy from.

Speaking at the launch of the Digital Transformation Office’s vison of what usable government services online should look, feel and behave like (more on that a little later) Taylor revealed the federal government is pumping a modest but respectable $15 million to develop a new ‘Digital Marketplace’.

The green-lighting of what amounts to a ‘foodhall’ of solutions and ideas is quickly getting strong backing from parts of the business community, especially start-ups, SMBs and anyone else who has a solid proposal or service but can’t actually afford to deal with the onerous and expensive process of public tendering for each and every deal.

The $15 million funding itself may not be huge, but it’s the delivery dates that has industry excited and parts of the public service a little nervous.

Taylor has promised a prototype (we assume alpha) by the middle of the year and a public beta by the end of the year.

The really big question, however, is whether the new Digital Marketplace – initially geared towards creating a pool of on-call agile development providers to work on government projects – will grow to challenge existing procurement mechanisms run out of the Department of Finance through the AusTender system.

Asked where the new facility will live in terms of the machinery of government, Taylor told Government News that “all of these are issues that will be looked at” as part of the creation of the Digital Marketplace – but then stressed that the most important thing was streamlining processes, eliminating red tape and making things easier and faster.

It’s a painfully diplomatic non-answer, but make no mistake, there’s now a steely determination to finally reform not just Canberra’s technology execution and procurement agenda, but a clear openness to tapping into supplier bases run by the states.

Procurement’s Lonesome Blues
So far it’s largely been New South Wales, led by Finance, Services and Property Minister Dominic Perrottet, that’s been spearheading the charge on procurement reform by nuking tendering obligations for run-of-the-mill tech and other purchases in favour of a catalogue or ‘markethall’ approach.

Deliberately ruffling a few feathers along the way, Perrottet has repeatedly extended offers of access to his government shopping centre – not just to other states but to Canberra as well, and councils too.

So the really big thing that shifted on Wednesday at Taylor and DTO chief Paul Shetler’s latest ‘reveal’ is that Taylor publicly backed the pursuit of common, interoperable standards and processes across government for procurement so that businesses might only need to be accredited once.

If successful, for anyone trying to sell to government, it’s big news and potentially bigger savings.

Sure, it’s a little boring and nerdy, but it’s also kind of huge.

“Whilst it will take work to get there, it is the right aspiration and one we should be moving towards.

“I think the first step is for each level of government to say that they are open to it, that’s the first and most important step and certainly we are saying that – again I’m talking about digital service providers, but that’s an obvious start to get this to work.

“Then we need  to do the work to create common standards, common processes and that takes time, and work, and that certainly will be part of what we are looking at in the coming months as we work up the Digital Marketplace,” Taylor said.

Taylor, isn’t ashamed to use his pre-political skills to borrow a trick or two either.

“As a management consultant I learned the power of stealing ideas from other people,” he quips.

One form fits all
True, standards can be painfully technical, but when they become inconsistent and multifarious they don’t just drive business spare with rage, they actually act to exclude government from new opportunities for efficiency – a factor that many believe is one of the reasons why government is playing online catch-up with banks, airlines and retailers.

The chief executive of the Council of Small Businesses of Australia (COSBOA), Peter Strong is backing Taylor’s push to try and give SMBs easier and more consistent access to government contracts, especially harmonising accreditation requirements.

“It’s a great idea” Strong said, adding that for many specialist suppliers there might not be enough work in a single jurisdiction to justify bidding for an contracts on an individual basis.

“Sometimes there’s not a big market for one state; but there is at a national level” Strong said.

Shifting culture
One of the reasons Digital Services are becoming a natural starting point for what could be a national, cross-jurisdictional procurement model is because at the moment, they just don’t fit existing ‘go-to-market’ regimes that requires agencies and councils to issue highly specific requirements that businesses then have to bid for on a contract-by-contract basis.

One of the biggest challenges faced by agencies and businesses alike is the amount of time and money it costs to go to tender, even for something relatively common like developing a web application and online transaction service creates debilitating cost and time overheads.

Taylor, like Perrottet, is now openly questioning whether the tendering model is still fit for purpose to achieve tangible results on getting digital government happening quickly.

“We want people coming to us with ideas, not just people structuring-up tenders and forcing people into it. We need to think about different processes for releasing data and getting private service providers to use that data in clever and innovative ways.”

Taylor says that the very fact that many businesses don’t even bother going for government work means the public sector “is missing out on the knowledge and the capabilities of a lot of very energetic entrepreneurs and small businesses we should be tapping into.”

“It’s just not good enough that we don’t tap into them.”

Burial by Government
DTO chief Paul Shetler’s take on simplifying business interactions with government – and not just for procurement – is equally frank.

“It’s actually quite difficult to get things done with government, even though we’ve been opening up all these digital channels… [and] perhaps  we have been opening up so many of them. What that means is that people don’t really understand what it is that they need to do,” Shetler said.

Running through what the online process for setting up a new business should look like, at least according to end-user research, Shetler produced a quote from a “serial entrepreneur” who said businesses were better off paying experts to deal with government because “dealing with that complexity will bury you”.

“It’s setting up an industry of rent collectors to make-up for the complexity of our services,” Shetler said.

“If you think about that, we can do a lot better. Really, really, that’s not acceptable.”

What the DTO thinks could be a prototype solution is here.

Election permitting, Angus Taylor is staking his career on it.