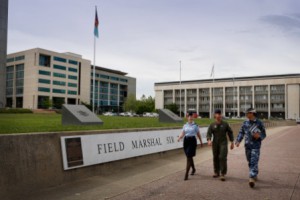 Meaningful pay increases for Australia’s uniformed and civilian Defence personnel might be off the table, but that hasn’t stopped the massive department from calling for bids to refurbish the imposing marble façade of the Russell headquarters of the military’s top brass in Canberra.

Estimated to cost at least $500,000, the issuing of the tender for a cosmetic facelift at headquarters comes as Defence’s senior management put the final touches on a pay offer for 20,000 civilian staff that is expected by unions to be similar to the below inflation 1.5 per cent increase offered to uniformed personnel.

The building works are unlikely to go down well with staff negotiating over pay. The scale of anger over Defence’s pay offer to uniformed personnel late last year forced Prime Minister Tony Abbott to back down over the stripping of some leave provisions and entitlements and the issue has continued to burn in the Senate thanks to now independent Tasmanian Senator Jackie Lambie.

Unions and Defence support groups have persistently argued savings should be found by the government and agencies from areas other than pay and staff reductions.

Keeping up appearances has been a long-running challenge for Defence. The AusTender documentation reveals that the marble exterior of the heritage buildings has been been causing headaches for several decades.

A report from global engineering consultancy Jacobs notes that “problems were observed in the marble claddings of Buildings R3 and R4 of the Russell Precinct in Canberra within a few years of their completion in c.1965.”

It notes that “inadequate provision was made in the original structure to accommodate building movement – including concrete shrinkage – leading to the imposition of building structural loads on the cladding panels.”

The outcome of those defects has been that the marble panels have been warping to the point that Defence now wants to know whether they will remain safely adhered to the building in years to come.

The report also notes that although it would be possible to replace the marble with another cladding that behaves more predictably.

“As the existing cladding is of significance to the heritage [values] of both the buildings and the precinct, the preferred approach, until shown to be too difficult or hazardous, has been to retain the existing cladding   monitoring it to ensure its short to medium term stability and resealing the joints to re-establish weather tightness and visual amenity.”

The solution proposed to keep up Russell’s marble façade is to measure the stone panels and their movement with lasers and set up “canary panels” with special gauges “so that panel movement can be directly monitored.”

However hard heads at Department of Finance might yet have some sympathy for their colleagues on the other side of Lake Burley Griffin. Finance own John Gorton Building was recently covered in scaffolding after its sandstone panels started coming loose from the Stalinesque structure.

The repair bill for that loss of face came in at around $2.1 million.