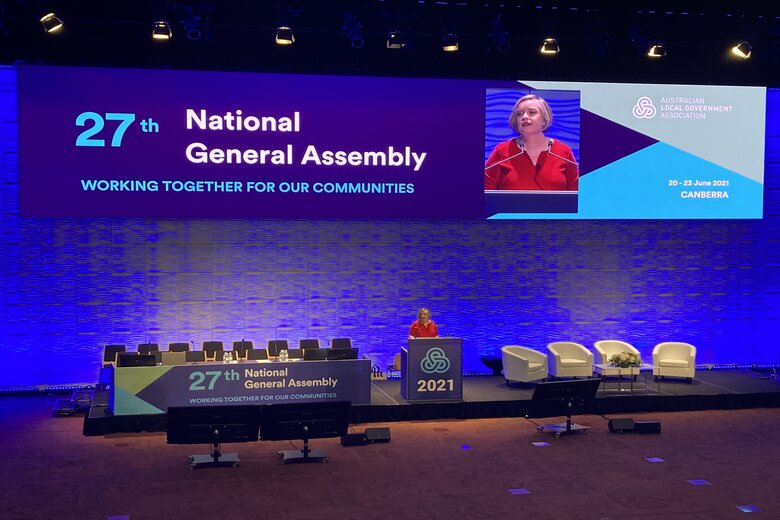 A motion calling on the federal government to introduce a special tax to fund local government disaster resilience and recovery has been voted down at ALGA’s national assembly.

Delegates from Australia’s 537 councils are meeting in Canberra for the Australian Local Government Association’s National General Assembly after last year’s convention was cancelled due to covid.

Shoalhaven councillor Patricia White said people gladly donated to councils after bushfires swept through the region and she believed they would support paying a tax.

“Over the last two years we’ve had bushfires, floods and covid,” she said.

But Angela Evans, president of LGA South Australia, argued local government shouldn’t be advising the federal government on taxes and warned such a move could undermine calls to increase Financial Assistance Grants (FAGS).

Cr Evans said LGASA was cautious about telling other tiers of government how to raise the revenue they need.

“Any suggestion of a new levy or tax should be led by the Commonwealth government,” she said.

Motions to reinstate local government in national cabinet – which ALGA president Linda Scott described in her opening address as “a failure at the highest level” – and increase FAGs passed unanimously although a motion to redistribute FAGS to favour regional councils was withdrawn.

The vote was also split on funding for regional airports.

A motion by Queensland’s Central Highlands Regional Council in Queensland calling for funding for regional airports to offset the impact of covid-related impacts was carried 98-20, but not without dissent from City of Adelaide which expressed concern about the diversion of funds from major cities.

“Supporting funding for regional airports potentially would mean a diversion of divert funds away from where they are critically needed in major cities where we are experiencing a significant loss of attendance, participance, visitors, workers within cities,” Adelaide’s delegate said.

“We are certainly very sympathetic to the regional issues but we would oppose it due to the potential for those funds to be diverted away from cities.”

Meanwhile Cootamundra-Gundagai Regional Council withdrew a motion calling for the redistribution of FAGs to give more to rural and regional councils, which was to have been debated alongside a motion opposing any FAGs redistribution.

Cr McAlister said Cootamundra’s merger with Gundagai in 2016 had been an “absolute financial disaster” and Council had accumulated losses of $28 million and was budgeting for losses of $17.5 million over the next ten years.

However, he said councils had a stronger case for a FAGs increase if they spoke with one voice.

Cootamundra Mayor Abb McAlister said he was withdrawing the motion to back the rival motion from Forbes Shire, which called for no redistribution of FAGs until the level was increased across the board to one per cent of commonwealth tax revenue.

“I think we’ve got a stronger case if we go as one … and we’d be happy with the one per cent,” he told delegates.

Investment in roads proved another point of contention with a motion to call on the federal government to invest in more nation building road transport projects the subject of considerable debate.

Penrith City Council said in a joint motion with Lachlan Shire Council that proposed projects like the Castlereagh Connection linking the Central West to the Western Sydney Airport, and a transport link over the Blue Mountains, had the potential to improve freight and passenger movement and contribute to national productivity.

It was opposed by City of Blue Mountains with Cr Brent Hoare, who argued the motion was too roads-focussed.

“We’ve got a huge debate going on in the mountains about whether we allow B-double trucks to come through the mountains by the expenditure of bajillions of dollars on fanciful tunnels promoted by National Party members out west,” he said.

Councillor Colin Hesse from Inner West Council said there should be an investment in rail instead.

“Rail infrastructure keeps trucks off roads, it keeps our roads safe, it reduces the amount of money we have to spend on maintaining our roads, and the only sane way to move bulk freight is by rail.”

Despite the objections the motion was carried 117-29.

In other business, delegates voted against new planning controls to ensure pandemic-safe housing, but after facing objections passed a proposal to eliminate the closure of state and territory borders because of covid.

The motion put forward by the NSW border council of AlburyCity, also called for the harmonisation of regulation, policies and practices to mitigate the financial and social impact of the anomalies on border communities.

Councils voted in favour of a motion to harmonise long service leave leaves across Australia to encourage continuity of service in local government and allow for portability between local government employers.