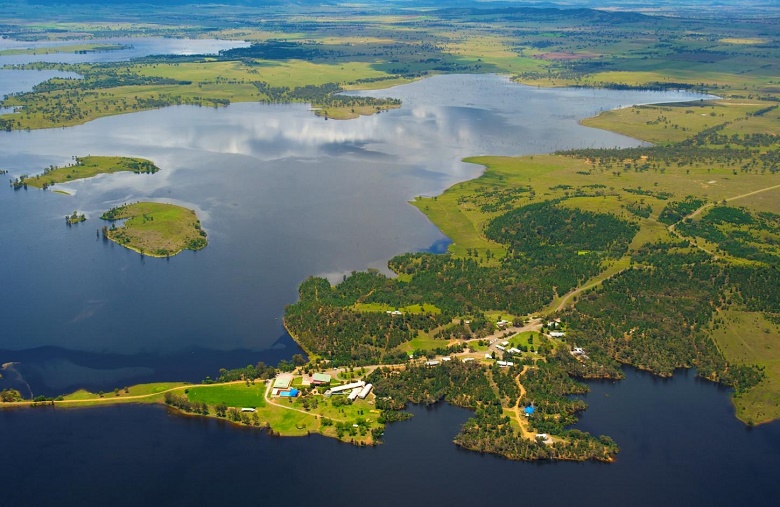 Lake Keepit, a popular swimming spot in Gunnedah Shire, seen in healthier times. Today the water is just at 0.05% of its capacity.

Five regional local governments have partnered on a future water security project to tackle one of the worst droughts in recent history.

As almost 80 per cent of NSW feels the crippling impacts of drought, five regional councils have launched an ambitious study looking at future water needs in a bid to boost agricultural output and future-proof the local economy.

Pressure has been mounting in north-western NSW as the local economy feels the pinch of reduced agricultural output, says Jamie Chaffey, mayor of Gunnedah Shire and chair of Namoi Unlimited, a Joint Organisation of Councils in the region.

Joint Organisations of Councils are an initiative of the NSW Government which bring councils together to identify and act on regional priorities.

With a heavily agriculture-reliant economy, the drought is pressuring the Namoi region, particularly in areas like Gunnedah which just 10 to 15 years ago was dealing with a critical population shortage, says Cr Chaffey.

“There are a lot of people I respect in the community who have been here for generations saying that this is the worst drought in memory in this region,” Cr Chaffey told Government News.

Now it’s hoped a new study that will look at water supplies in the region will help inform a future water strategy and provide new solutions.

“We need to make sure we have a strong environment for growth, and without really understanding the impact of water we can’t understand how it interacts with future growth plans,” Cr Chaffey said.

“We have been looking at regional strategies in key areas and working on collaboration between councils to make sure that scale and capacity gives us strength as a region,” he says.

The Water for the Future Project will include an evaluation of existing infrastructure to inform a strategy around the infrastructure needed to safeguard the region into the future.

A region-wide audit will include consultation with producers, water users, business, processors, climate and industry groups, as well as a mapping of areas with a water shortage.

The research, which is being undertaken by consultants Rhelm, will assess current water utilities, including regional access, security, quality and usage.

“We understand for someone to be successful in one council area there is the potential for greater outcomes for shire councils that make up the region,” he said.

A final report from the project is due mid this year.

One thought on “Councils collaborate to face water shortage”