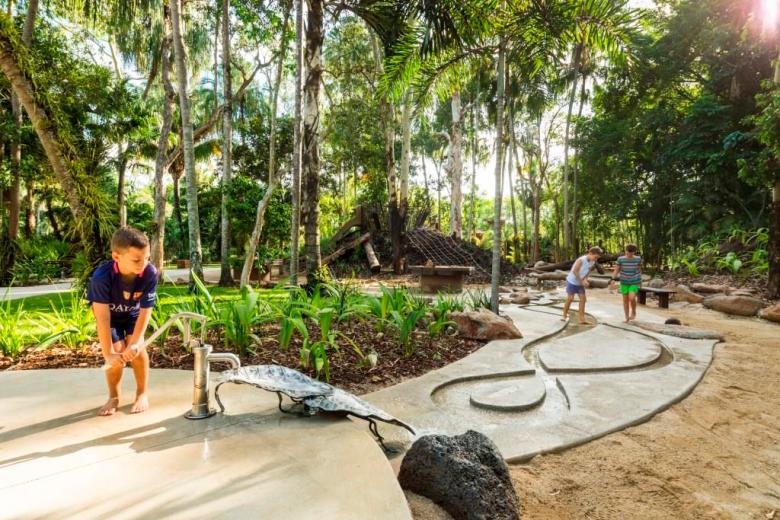 The transformation of a sloped car park into a vibrant green community space and a project to increase public use of urban waterway corridors are among the local government initiatives recognised in recent awards.

Sunshine Coast Council picked up two awards at the 2018 Queensland Landscape Architecture Awards for its new Piccabeen Green in Palmwoods, a $3 million rejuvenation of the town square into a green public amenity.

The project, which includes seating, shade and outdoor dining opportunities, has improved pedestrian links through the town and connected three shopping precincts.

In addition to picking up a civic landscape award, Sunshine Coast Council was also recognised in the community contribution category for encouraging a community-led approach to the project.

“This project is an excellent example of community contribution that led to high value social and economic outcomes by moving the role of the community from one of collaboration to empowerment,” said the judges of the awards, which are run by the Australian Institute of Landscape Architects.

Logan City Council was recognised for its Slacks Tracks project, which aimed to improve public safety while also lifting the profile and use of urban waterway corridors.

The judges said that the council’s use of colourful contemporary detailing in a natural setting “has created a distinctive character for the corridor that raises the bar for this type of project beyond the realm of standard drawings and details.”

The project, which was recognised in the parks and open space category, showed the potential for “creative use of small budgets.”

Also in the parks and open spaces category, Urbis was recognised for its work on Rockhampton Riverside for Rockhampton Regional Council.

The judges said the project “bridges the gap between the city’s impressive heritage buildings and the river, creating an engaging urban waterfront and demonstrating creative, flood resilient design.”

The finished works redirect the city’s focus towards the river and connects parkland and streetscape through a blend of flexible, pedestrian prioritised spaces and architecture that promotes community use, they said.

The project, by Landplan Landscape Architecture, is a creative and nature-based play space, the judges said.

“Be it hidden fairy gardens, giant snakes or physical challenges the play space successfully embeds itself into the Botanic Gardens providing opportunity to interact with water, nature and learn through creative play,” they commented.

“The central watercourse fed by hand pump and rainwater was a creative and sustainable way to overcome the challenges of a flat site whilst also achieving 100 per cent retention of existing trees,” they added.

Logan City Council picked up an award in the small projects category for its Wembley Link Pathway Public Art initiative, which celebrates the diversity of the local community to deliver an eloquent piece of landscape architecture

“The colourful patterning draws from the flags of the top 43 countries represented in multicultural Logan, and this is echoed in seats which are also draped in colourful ‘welcome mats’,” the judges said.