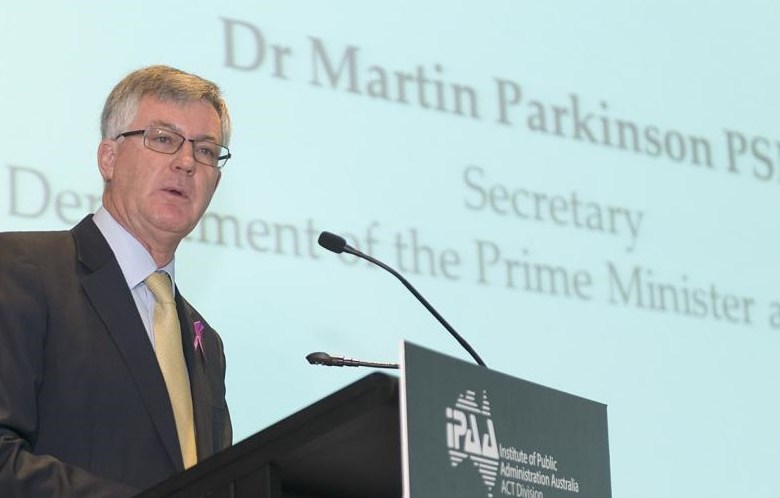 Dr Martin Parkinson is set to wrap up his tenure at PM&C.

Long time public servant Martin Parkinson has stood down from his role as Secretary of the Department of Prime Minister and Cabinet.

Dr Parkinson is set to wrap up his tenure on 30 August 2019 and will be replaced by Treasury secretary Philip Gaetjens.

Mr Gaetjens has held leadership roles in the Commonwealth and State public sectors for a number of years including previously working as Secretary of the NSW Treasury.

Prime Minister Scott Morrison has hailed the appointment as a step forward in the government’s campaign of reform of the public service, and faced down criticism that he’s politicising the bureaucracy.

“Phil will bring enormous experience to the position and help drive the Government’s ambitious agenda over the next three years in delivering for the Australian people,” Prime Minister Scott Morrison said.

Three administrators have been appointed to South Gippsland Shire Council after the council was stood down by the state government earlier this year.

The regional Victorian council was sacked in June after an inquiry found widespread governance failures.

The report found high levels of conflict between councillors was hampering council’s performance.

Ms Julie Eisenbise was named Chairperson and Mr Rick Brown and Christian Zaqhra were named the other administrators tasked with running council until the next election in 2021.

Ms Eisenbise was previously the mayor of Manningham City Council, while Mr Brown was for 13 years a member of the RMIT council.

Mr Zahrea is a public policy and strategy expert with experience in rural and regional development.

The Federal Police is bracing for change after the government this week recommended to the Governor-General that Mr Reece Kershaw be appointed as the Commissioner of the AFP.

Commissioner Kershaw most recently worked with the Northern Territory Police Force where he completed secondments to the National Crime Authority, the Australian Crime Commission and various overseas postings.

Commissioner Kershaw will replace the outgoing Commissioner Andrew Colvin who served the AFP over the last 30 years.

The announcement comes after Commissioner Colvin announced his retirement earlier this month.

South Australia’s economic regulator ESCOSA, who has been charged with reviewing the state’s rate cap, has appointed a new head.

Mr David Swift, who previously worked for the Electricity Trust of South Australia (ETSA), was on Thursday named the new Commissioner of the Essential Services Commission of SA.

Mr Swift is an internationally renowned expert in energy and regulatory matters.

Prior to his work with ETSA, Mr Swift was the Chief Executive Officer of the South Australian Electricity Supply Industry Planning council.

NSW’s peak body for public works has announced the departure of its long-standing Manager of the Roads and Transport Directorate.

Mr Mick Savage this week announced he will be stepping down from the role as he moves into retirement.

Mr Savage has been working at the Directorate since 2004 after many years in local government.

“A highlight on the annual calendar is the NSW Local Roads Congress, hosted by the RTD in Parliament House each June, and under Mr Savage’s leadership, we have seen the incredible influence and engagement with elected officials from local and state governments at this event” he said.

Mr Savage is set to remain in the role until November, at which point he will take on a new project position within the Directorate.