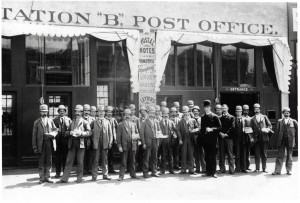 There’s no let-up in the battle for market share in government payments and electronic document presentation to consumers between banks and the Post Office. That’s good news for bigger public sector organisations and taxpayers who stand to benefit, observed Julian Bajkowski in our June/July 2014 magazine.

When government-owned mail monopoly Australia Post made a vigorous new push to try and capture a significant slice of the electronic bill payments and presentation market through the launch of its Digital Mailbox last year, it was only a matter of time before a competitive response in kind came down the line.

Faced with plummeting letter revenues that will soon become significant losses, Australia Post and its owner openly acknowledged that the days of sending paper bills and statements are fast nearing their endpoint in terms of commercial viability. All thanks to an unstoppable shift by consumers to more convenient and cost effective digital channels.

Post’s most recent online strategy, MyPost Digital Mailbox, has been one largely predicated on taking a slice of the market for delivering the commercial and official correspondence that feature in the lives of ordinary Australians.

At its simplest, the MyPost value proposition is supposed to be a new, secure one-stop-shop to receive recurring utilities, social security statements and the bulk of official mail sent by government entities. Prospectively, these range from councils to state government billers like motor registries and federal agencies such as Centrelink, Medicare and the Tax Office.

Post’s idea is bold. But to make its new service hold water financially so losses are offset, it doesn’t just have to offer a cost saving electronic substitute to paper mail, but a transactional service through which it can also ‘clip the ticket’ on payments ‑ a much tougher market to penetrate and hold.

Complicating matters is that Post initially launched an internet-based payments service through its online version of POSTbillpay in 2000 ‑ with great fanfare – but then effectively walked away from the market in 2007.

Post’s retreat left it to local banks to keep innovating in the domestic online payments and document presentation space through their established service BPAY.

That move creates a clear and pertinent public policy question: is it in the interests of consumers, taxpayers and wider competition to have a government entity re-enter the commercial transactions space when the market is arguably already well served?

Significantly, Australia Post has already filed a submission complaining that BPAY has too much market share to the Abbott government’s Financial System Inquiry, which is being chaired by David Murray and due to report in November 2014.

“Reliance on key industry participants to progress and regulate change has been detrimental to the pace of innovation. For example BPAY, with its dominant market share and unique ownership arrangements may be impeding competition in the market place,” Australia Post’s submission says, adding that it wants the present system of “industry led self-regulatory bodies” reviewed.

However agitating for greater competition could easily become be a double edged sword for Australia Post, especially when it comes to pushing the envelope on innovation and letting consumers and their commercial and government billers vote with their clicks.

A key issue to be resolved is now that Post is actively seeking private sector digital billers, should private sector service providers ‑ at a minimum‑ be equally able to commercially contest government document presentation business to improve the quality of government service and save taxpayers money?

(Notably, the National Commission of Audit’s view was that Australia Post should be considered for privatisation, a move that could shift a potential financial liability from the public to the private sector.)

Although BPAY’s management politely declines to talk directly about individual competitors, the payment service that started in 1997 has now evolved to the point where it recognises that its ‘classic’ bill payment service and its online bill presentation service BPAY View will ultimately become essentially the same experience.

What this means for consumers and billers alike is that as electronic documents and interactive billing information ultimately take over from paper mail, the administrative burden of our lives will naturally gravitate to the most convenient, secure and efficient place to transact and do business – especially in the a mobile age.

BPAY’s general manager of business services, Keith Brown, says that while local governments and councils have traditionally been big early adopters of BPAY View, there is an increasing awareness of a clear opportunity for state and federal sectors to harness both BPAY View and the classic BPAY payment service to save costs and improve service.

“In terms of the presentment market of BPAY View … look at government departments that issue significant amounts of paper ‑ the Australian Taxation Office or Centrelink for example,” Mr Brown says.

He notes that coincidently, some of Australia’s biggest legacy paper pushers at the federal and state level are also significant BPAY payments billers “so there’s a huge opportunity when we are talking about bringing BPAY view and BPAY together, for them to consolidate that process.”

Put very simply, if given a choice consumers will more naturally look towards where they do their everyday banking and make payments to view government related documents ‑ rather than going to where government documents are sent to then make payments.

Mr Brown cites one possibility of being able to get “tax information from BPAY View” in conjunction  with a payment of an amount from either side.

“Even if there’s a payment back into your account, the information can come back through, so you can link the two together,” Mr Brown says.

The very idea that BPAY’s member banks could soon be contesting the mail-house business for some of the biggest federal and state agencies will not sit comfortably with Australia Post ‑ but the savings on offer are likely to appeal to cash-strapped public services which have sometimes been criticised for not moving quickly enough on the mobile and digital transaction front.

Also very notable have been frank admissions prior to the Budget by Treasurer Joe Hockey that core computer systems at Centrelink and the ATO will soon need to be upgraded at a cost of “billions”.

One of the more pressing issues for large state and federal government entities looking to save on mail by going to digital document hosting is that of execution capability; managing risk, ease of integration and looking at what is now in the market.

“It would be sensible to use an existing service rather than looking at something that is currently unproven,” Mr Brown says.

He similarly points to the long term commitment to continuous innovation by BPAY that means its stakeholders – essentially Australia’s banks – can continue to deliver on their customers’ expectations, particularly on the mobile front.

“All mobile banking apps now have BPAY as an option,” Mr Brown says.

Mr Brown is also adamant that solid competition in the payments and electronic presentation market is not only necessary, it is also present.

“There is certainly choice in the market. When you look at the payments market, we [BPAY] have around 35 per cent. Yes we are there as an aggregator within the banks ‑ but there are plenty of people receiving email bills as well [which refer customers back directly] to the biller’s site,” Mr Brown says.

A lesser known aspect of BPAY is that unlike overtly profit driven payment services, its business model works as a low-cost utility platform for member banks – the benefits being that wholesale transaction processing costs are kept low because of the shared service and infrastructure model.

“We are owned by the major banks, but we are not government owned, so we have to make money for our owners,” Mr Brown says.

“We are not for profit ‑ but we are certainly a low cost provider,” Mr Brown notes.

“We are not here to maximise profits in any form, which other entities might be.”