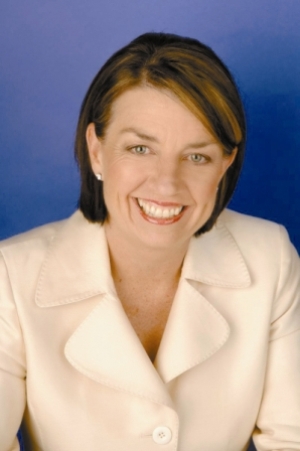 Queensland has become the first Australian state to elect a female Premier.

As Anna Bligh swept to victory on Saturday she congratulated Queensland voters for helping her and her Labor government achieve an important milestone in Australian political history.

“I grew up in a time when people regarded us as the backwards state of Australia. And there was a time when nobody would have thought that we would be the first state in the country to elect a woman as our Premier,” Bligh said.

“And you’ve proved every one of them wrong, and I thank you tonight.”

Labor won a nine seat majority, with only a 4 per cent swing against it.

As Labor entered its fifth consecutive term in government, Bligh announced that she would create a new cabinet to help her steer Queensland through the “very tough times” ahead.

“I took to this campaign a clear plan to protect and create Queensland jobs, because behind every job is a working family,” Bligh said.

“And you’ve given me a mandate to get on with the job that needs to be done. I will fashion a new front bench to take our state forward.

“That new front bench will be a blend of new talent and experienced hands to take on the biggest challenges that confront us.”

Deputy Premier Paul Lucas has been handed the health portfolio.

“There is no doubt that the mandate comes with a message and the message is a very clear one: Queenslanders want me and my government to do better,” Bligh said.

“They want us to do better in some of the biggest areas of responsibility and without a doubt one of those is health.”

Other members of the refreshed cabinet, to be sworn in on Thursday, will be announced over the coming days.

Following his third unsuccessful attempt at winning the premiership, Lawrence Springborg has stepped down as leader of the Liberal-National Party (LNP).

“I’ve had three opportunities to put myself forward as the alternate premier of Queensland,” Springborg said from the tally room.

“They have been great opportunities; I’ve enjoyed them very much. It’s been an enormous privilege to actually take us forward from 15 seats in 2004 to potentially 35 seats in this election.

“However, I accept that my days as Opposition leader are numbered, and it is now up to my parliamentary colleagues to choose the team that they want to go forward to fight the next election.”

He said his party should have “fought fire with fire” by running a scare campaign against Labor.

LNP Treasury spokesman and former Brisbane City councillor Tim Nicholls is one of the frontrunners tipped to replace Springborg. The LNP leadership vote will be held on April 1.