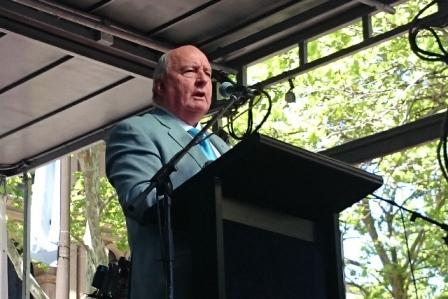 If you’re going to provoke anybody in NSW, it is unwise to get powerful talkback radio host Alan Jones offside.

Jones reared up again over forced council mergers on his 2GB breakfast show yesterday (Tuesday) as he blustered about regional and rural councils under the threat of forced amalgamation, councils which the state government is aiming to reduce from 109 to 83.

Despite being a die-hard Tony Abbott fan, Jones is an interesting kettle of fish. One moment he’s on Q&A happily declaring himself a feminist, the next he’s making outrageous comments about the Stolen Generation.

But whatever the man’s views, ignore him at your peril. He has the bit between his teeth and he is not going to let NSW Premier Mike Baird forget it.

Talking to activist George Spring from Save Walcha Council community group yesterday, Jones opened fire on the state government for promising there would be no forced council amalgamations.

He also accused the government of peddling lies about mergers leading to lower rates and better services, fudging public inquiries into mergers and keeping parts of the KPMG report secret.

“If you want to get your local government teams to play well you wouldn’t be ramming your prejudices down their throats,” Jones said. “You would be talking to them, listening to them: hallmarks of real coaching and real leadership.

“No-one cares about the bush,” Jones announced. “They [rural councils] are simply saying “leave us alone”.”

“I feel democracy is well and truly dead in NSW, if it isn’t already. That’s why there are Donald Trumps.”

Walcha, Oberon and Cabonne Councils­­­­­­­­­­ began a legal battle against forced council mergers in the Land and Environment Court in Sydney yesterday.

The three councils are following in the footsteps of Woollahra Council, whose case also began yesterday, arguing that the state government has used the wrong section of the Local Government Act to pursue forced council mergers so must start from the beginning.

The folks from Walcha are a spirited lot. They recently belted out a regional Australian version of Queen’s hit “We are the Champions”, which has scored them nearly had 20,000 views on their Facebook site. If you look closely you can see a certain Barnaby Joyce, Member for New England and Deputy Prime Minister, doing a spot of onstage karaoke. 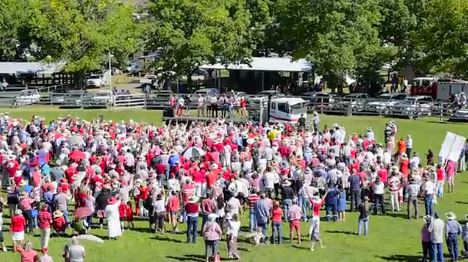 Making Freddie Mercury proud: “We are from Walcha.”
The lyrics have been rewritten to comedic effect:

“I’ve paid my rates, time after time.
Done my submission and committed no crime.
Government mistakes, give power to few.
This is not fair [inaudible]. Why can’t we chose?

One thought on “Baird pokes the bear: Alan Jones on the warpath over council mergers”