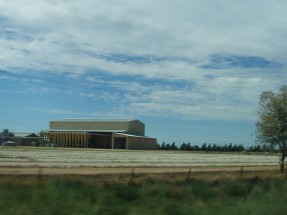 The Federal government’s Renewable Energy Target (RET) may still be in political limbo, but states are voting with their sustainable dollars after New South Wales’ Minister for Industry, Resources and Energy Anthony Roberts and Minister for the Environment Mark Speakman cut the ribbon on what has been hailed as the installation of the final solar panel at Australia’s largest solar project.

Located in the Western town of , Mr Speakman is pushing the sunny-side-up success of a big venture from AGL, First Solar and the local community for their support of a 102 megawatt (MW) plant.

Solar energy in many regional and remote areas is an increasingly viable alternative to traditional fuels that have to be trucked or pipe- in at considerable cost.

“The NSW Government is serious about supporting renewable energy, and has provided $65 million in funding for this project here in Nyngan and another 53MW solar plant under construction near Broken Hill, the second largest solar plant in Australia,” Mr Speakman said.

“Together, these solar plants will generate enough electricity to power more than 50,000 homes across NSW.”

As traditional manufacturing increasingly goes into decline, communities and their businesses are looking to more contemporary industries like renewables that can cut costs for businesses and retain local employment and skills.

Mr Roberts said NSW was at the forefront of large scale solar and renewable energy.

“NSW is leading Australia in supporting the clean energy sector, which supports more than 13,000 jobs, contributes to lower energy costs and provides employment and investment in regional communities,” he said.

“The share of renewable energy in NSW’s electricity generation mix has almost doubled in the past five years with approximately 13 per cent of our energy generation coming from renewable sources in 2013.

“This project will set an example that will help drive further investment in large scale solar in regional NSW and across Australia.”