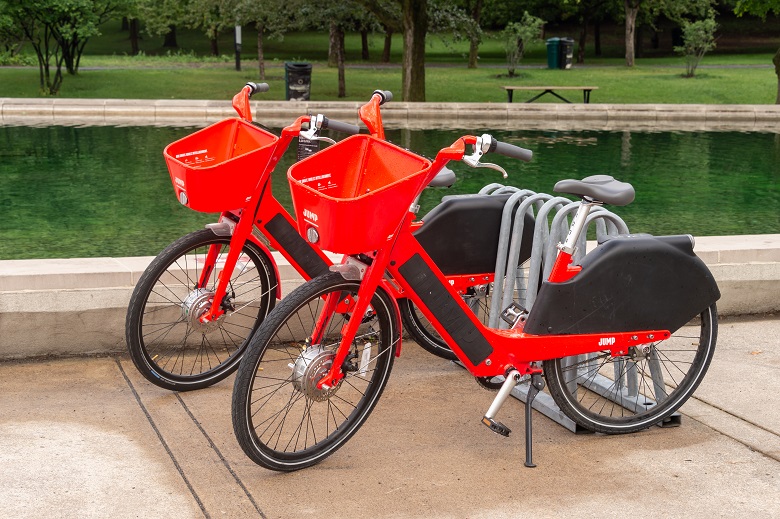 City of Melbourne, City of Port Phillip and City of Yarra have signed a deal with the ride-sharing giant to operate the city’s first dockless electric bike share scheme.

A new electric bike share-scheme will be rolled out in Melbourne next month following a deal between three inner city councils and Uber.

City of Melbourne, City of Port Phillip and City of Yarra have signed an agreement with the ride-sharing giant to operate the city’s first dockless electric bike share scheme, with the first 400 JUMP bikes to be rolled in March.

Users will be able to locate and reserve a bike using the Uber app and scan it to unlock it. Riders are charged $1 to unlock a bike and 30 cents per minute to their Uber account.

The bikes, which use geo-fencing and remote monitoring, are currently operating in 30 cities around the world in Europe, the Asia Pacific, the US, Canada and Mexico. Helmets are provided and the bikes have built-in cable locks.

They have small battery-powered motors which enable them to go up to 25 kph.

“We are excited to work with the City of Melbourne, the City of Port Phillip and the City of Yarra to provide a new way to help people move around the city that is sustainable, safe, efficient, affordable and reduces congestion,” JUMP general manager Henry Greenacre said.

Four hundred of the bikes will be introduced in Melbourne as part of one-year-trial from March, with more to be rolled out in Yarra and Port Phillip over the following months.

The bikes can be used within the combined boundaries of the three councils but penalties apply for taking them outside of this or failing to leave them in appropriate areas or parking them illegally.

The bikes will be serviced and maintained by Melbourne-based social enterprise Good Cycles.

City of Melbourne Lord Mayor Sally Capp acknowledges that Melbourne’s past forays into shared bikes have attracted “anti-social behaviour” from some people, with bikes ending up vandalised and dumped.

But she said the Uber scheme has more oversight than previous share bike arrangements and there will also be local teams on the ground to service and maintain them, as well as a 24 hour customer service centre where reports of abandoned or damaged bikes can be made.

“We believe locals and visitors will work with JUMP and our councils to make this a success,” Cr Capp said.

Yarra Mayor Misha Coleman said she hoped the scheme would be a step in the transition to sustainable transport, while Port Phillip Mayor Bernadene Voss hailed the scheme as a way of reducing traffic congestion.

City of Melbourne’s Transport Strategy 2030 aims to make Melbourne the most bicycle-friendly city in Australia.