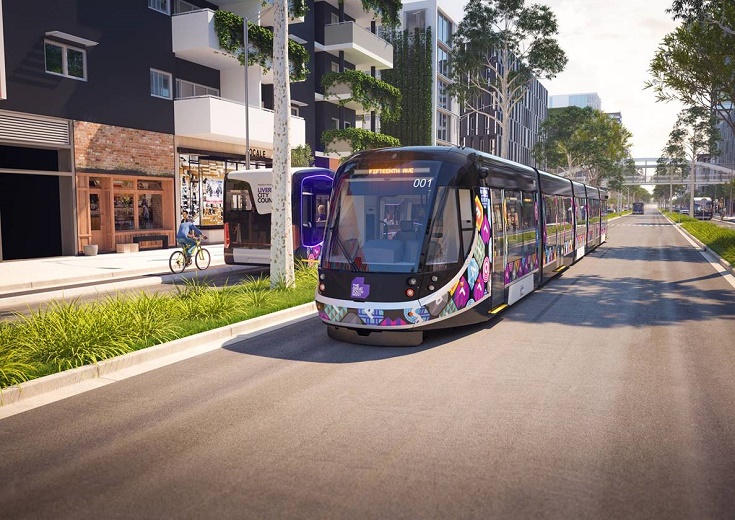 Sensors will guide a proposed trackless tram between western Sydney and the new airport.

A trackless tram is the centrepiece of a Sydney council’s vision for a ‘smart corridor’ that will connect Liverpool to the Western Sydney International Airport in less than 30 minutes.

Liverpool City Council this month unveiled its vision for the rapid transit project and has started working on the construction of the Fifteenth Avenue Smart Transit (FAST) Corridor, which will connect the new airport to Liverpool’s CBD.

Liverpool Mayor Wendy Waller says the focus has been on identifying appropriate technology and reliable infrastructure, which will eliminate the chance of breakdowns and delays in getting to the airport.

“We want it to be designed well and move efficiently through the spaces because reliability is very important,” she told Government News.

“Regular transport is needed because you have to move people from point A to point B regularly to catch planes.”

Cr Waller says a trip to the airport will take 20 to 30 minutes if the corridor is designed properly.

Liverpool City Council has been working on the project with Professor of Sustainability at Curtin University, Peter Newman, who came up with the idea of incorporating a trackless tram.

Professor Newman compares the proposed trackless tram to “a kind of digital train”, saying the concept is based on high-speed rail systems where trains are guided along a track by a guidance system.

The trackless tram would be guided by a thin white line, Professor Newman says.

“Imagine it going along the transitway, it rides along there and all you have is a little white line along the middle which it senses and follows,” he told Government News.

“It’s also got a satellite so you can keep track of it, just like you would if you were riding an Uber, and there are little sensors in buidlings or the side of the road.

“It’s being guided by light rather than by magnets or anything else. It’s purely sensored technology and it is electric.”

He says the tram will be fast and stable and doesn’t require tracks or an overhead line, making it much cheaper than traditional models.

The tram would also be able to operate without a driver, although a driver would still be present to override the system if needed.

Trackless tram technology has been pioneered by China since 2017.

A linked in strategy

Liverpool City Council’s innovation strategy is about improving the lives of citizens, Cr Waller say. This has informed discussions surrounding the corridor, with focus on the workers.

“If the workers can get reliable transport to and from their employment, that adds to their comfortability but also reliability of the workforce,” she said.

“So it makes it easier for them because a lot of our folk leave the area for work, so we want to see a bigger and better workforce happening out in that area.”

For the corridor to be a success, Professor Newman says it needs to have completely new technology and a “linked-in strategy’ with the trackless tram at the core.

“You can have really good transit, and you can be brought to that so you’ve got no need for a car yourself,” she said.

Professor Newman says it’s important to look at technology that can be controlled, rather than completely autonomous systems.

“It’s about using smart systems to make a better city, not to be dominated by the latest smart technology that would actually make a very dumb city,” she said.

Liverpool City Council hopes to have the corridor completed by 2026.

“We’re hoping that it will be completed by Boxing Day 2026 because that’s when the first plane is apparently landing or taking off,” Cr Waller said.

3 thoughts on “Trackless tram proposed for smart corridor to airport”