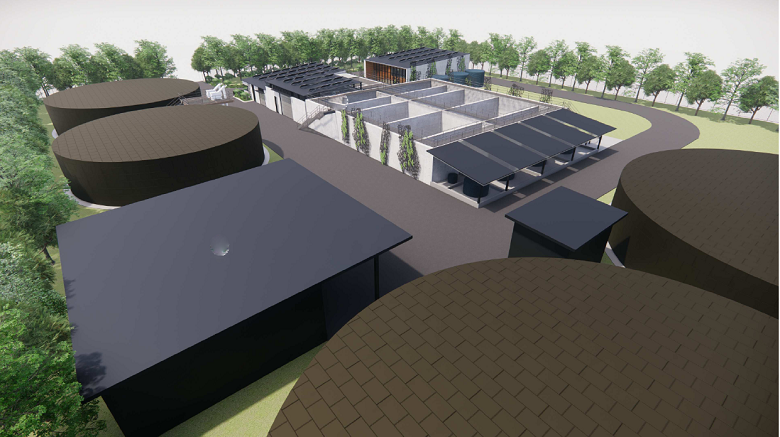 The SSP treatment plant will be able to produce 2.4 million litres of recycled water a day.

A waste water treatment plant being built to service a smart city development in western Sydney will use digital twin systems that monitor temperature and moisture to produce recycled water on demand for greening, cooling and household uses.

The plant will eventually be able to produce 2.4 million litres of recycled water a day, enough for 40,000 people, but that has the capacity to be scaled up, says Sydney Water’s growth planning and community frameworks manager Wayne Jackson.

Mr Jackson says while water recycling is traditionally done at large centralised plants, the SSP plant will be located in the community it will service and sit within the urban form of the Science Park.

The plant will use a membrane bio reactor system, which Mr Jackson says makes for a smaller footprint and less noise and smell.

Sydney Science Park’s smart systems include digital twins which will allow the plant will interact with the environment via moisture and temperature sensors to inform the amount of recycled  water that will be produced and deployed.

“So if you’re coming up for a heatwave on Sunday, you’re not sitting there storing the tanks in the water for Sunday, you’re getting it into the ground now,” Mr Jackson says.

“It’s computer modelling coupled with real life environment predicting what’s going to happen to determine the operation of the plant and how it’s producing its water.”

Excess waste water that isn’t used for the Science Park will be piped to Sydney Water’s St Marys treatment facility.

The Science Park, being delivered by private firm Celestino on 287 hectares of land as a mixed-use smart city, has been designated as an urban living lab by the CSIRO.

The Urban Living Lab concept is based on using local community knowledge coupled with scientific expertise to try new ways of doing things and measure outcomes in a real place.

“As a designated CSIRO Urban Living Lab, Sydney Science Park aims to create a more liveable, sustainable and resilient city, and water is at the forefront of this,” Interim CEO of Celestino Matthew Scard said.

“To partner with Sydney Water and have recycled water being used not only in homes, but in public spaces is a first for greenfield development and will create a much greener and cooler environment at Sydney Science Park.”

Sydney Water currently has 14 water recycling sites and is investing $1.3 billion on infrastructure projects in the Western Sydney Aerotropolis Growth Area between 2020 and 2022.

It and will have invested about $3 billion in infrastructure across the Western Sydney Parkland City by 2026.