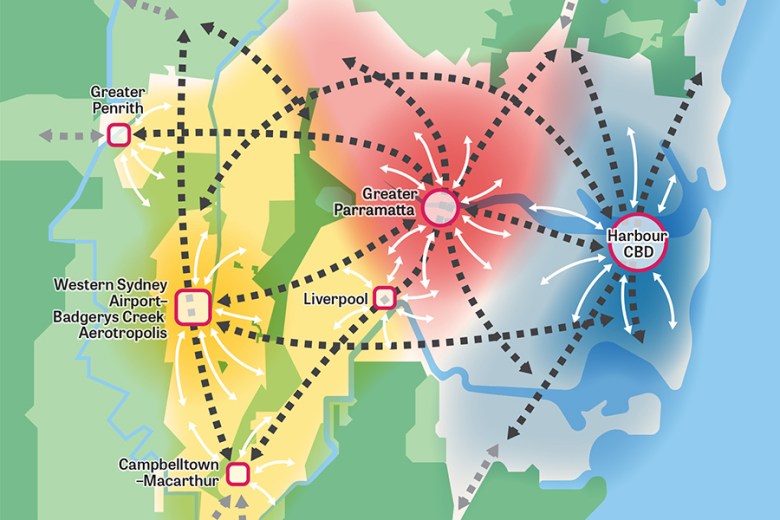 Centralised growth, lack of housing and inadequate transport are jeopardising Sydney's dream of the 30-minute city, a researcher says.

A researcher has cast doubt on a Sydney metropolitan planning body’s vision of creating three city hubs where residents live within 30 minutes of jobs and services, flagging concerns about the increasingly centralised nature of growth.

The Greater Sydney Commission’s (GSC) 40-year pipe-dream of the region as a metropolis of three cities with fast, interconnected transport could be thwarted by the reality of urban congestion in Sydney, a new paper argues.

The vision, first floated by the GSC in 2018, proposes a metro region with three cities – one in the east, one in the centre and another in the west all with jobs and services within reach of each other.

But Somwrita Sarkar, a senior lecturer in design and computation at University of Sydney and co-author of a new paper, doubts this vision will become a reality if Sydney’s current growth trajectory continues.

“What the data is telling us is that a massive number of jobs are still in the city and Parramatta. Penrith and Liverpool, Parramatta are still centres but not as big as they should be,” she told Government News.

Her recent work, which analysed journey to work data to test patterns of movement for the region, found that Sydney and Parramatta were the regions’ main ‘centres,’ while other locations did not themselves qualify as centres.

Sydney CBD, for instance, accounts for 15 per cent of jobs in the region while the remaining 85 per cent of jobs were scattered in ‘second order centres’ and ‘non-centres,’ suggesting that Sydney is not yet close to becoming a metropolis of three cities.

Transport infrastructure needs to be focused outside of Sydney and jobs need to be moved or created into other lesser known employment hubs for the three city idea to become a reality, she says.

“If you provide good transport connectivity, growth follows and development follows but if there is more and more centralised growth and all roads lead to the CBD it reinforces the current structure. If transport links could be made to improve connectivity in outer areas then we might see the process eventuate.”

A lack of affordable housing is also jeopardising the vision, according to Professor Sarkar, as it drives people outside of these major metropolitan hubs.

“If we have unaffordable housing, the  entire city can be really well connected but if we’re forced to go 50km out and buy houses at the fringes [growth will be decentralised].”

The city should focus on ‘sustainable densification’ and good transit connectivity, Professor Sarkar says, while also focusing on building ‘up not out’ in a controlled way.

Ben Rossiter, Executive Officer of Victoria Walks, which was last year funded by the State Government to participate in a 20-minute-neighbourhood pilot, said the 30-minute city push in Sydney is viable – but only if the infrastructure is concentrated where it needs to be.

“[Authorities] will need to place greater emphasis on no-commuter related trips. They need to include walking to access education, shopping, social activities and so on and they need to cater for those not in the workforce.”

The State Government must invest in making cities more walkable if they want to cut transit times, Mr Rossiter says.

“There should be no large-scale surface parking lots – parking should be in buildings or underground.

Land-use planning is also essential, he says, and the land within 20 minutes-walk of each city should be zoned for high density development.

“The state government needs to invest in crossings, traffic signals, expanded footpaths and other measures to create high quality, safe and convenient walking routes to each city,” he said.

“Fast, high frequency public transport will be needed to each city and between each city.”

This story was updated with comment from Ben Rossiter.