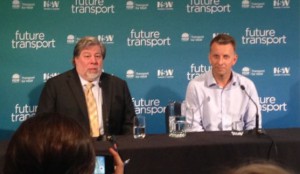 “I do have concerns about Uber becoming a monopoly,” Wozniak said.

“Uber will push their workforce down to the absolute lowest minimum wage that they can get away with. That’s how I think of Uber: not very nice thoughts.”

The strong words came at the NSW Government organised Future Transport Summit where officials, planners, industry and the occasional technology demigod are trying to thrash out a rough vision of how the next 20 years of transit will look like – minus the jetpacks.

Woz’s view is one senior Australian politicians and public servants are certain to be taking notice of as they try to manage the effects and consequences of the online juggernaut renowned for attacking regulators both in public and behind closed doors.

So far Uber has enjoyed a spot of sunshine after the NSW government moved to provide it and similar services some regulatory legitimacy rather than having transport authorities chase down and fine its drivers — but Uber’s honeymoon as a hip challenger brand could be as short lived as a wait for one of its cars.

Mr Wozniak said that he “like a lot of people have some distrust of Uber and how their drivers don’t really realise necessarily at first that they aren’t really making much money.”

“I want to use Lyft instead of Uber when I can now,” Wozniak said, conspicuously namedropping one of Uber’s emerging rivals.

A big concern for regulators, governments and passenger like Woz is that as so-called sharing economy platforms rapidly scale-up to disintermediate existing players – like licensed taxi services or hotels in the case of Airbnb – the volume of market share they capture can stifle competition.

“It is a danger when any group becomes a very powerful monopoly because they can take advantage and use it in bad ways,” Wozniak said.

“I would rather there would be a lot of competitive forces, I’d like there to be about four or five choices anywhere you go.”

Buckled-up beside Wozniak, NSW Transport Minister Andrew Constance was up for some political ride sharing of his own and certainly wasn’t about to argue for less competition.

“We want Lyft here, we want these other products here,” Constance said. “We want the taxi industry to become innovative and drive competition. The whole thinking around transport is going to change.”

With speculation rampant about what Uber will morph into should driverless cars become a reality sooner rather than later, Constance was pinged with a logical question as to whether self-driving will actually ease or worsen congestion given a finite amount of road space.

As the minister for trains, busses rather than roads (that’s Duncan Gay) the answer won’t be what car dealers want to hear.

“This is why I’m building new train networks,” Constance quipped. “I want people in trains not in cars.”

Wozniak also had some firm advice for governments and security agencies seeking a back door into encryption technologies that protect devices like the iPhone in the wake of the stoush between Apple and the FBI.

“I agree with Apple’s side in the case in the US with the FBI. I’ve been a long-time supporter of civil liberties and civil rights,” Wozniak said.

“In this case Apple actually said ‘look, you are a consumer, we make you a good product and we’re guaranteeing it’s so well protected even we cannot get at your data’… I’ve never really heard a company say that.”

Wozniak said he believed Apple had been “truthful and honest” in its stand that the company itself could not access the data the FBI had wanted.

“I admire that so much and then it’s so shocking that government comes in and says ‘no, we have to tell you [that] you cannot make your product secure’ when cybersecurity is so important to people,” Wozniak said.

“Where we can get it [cybersecurity], let’s keep it.”

“This case was just [a] flat footed attempt for the government to try and get in and make sure [that] ‘every iPhone ever we can get into’. I don’t believe that’s right … so I’m against it.”