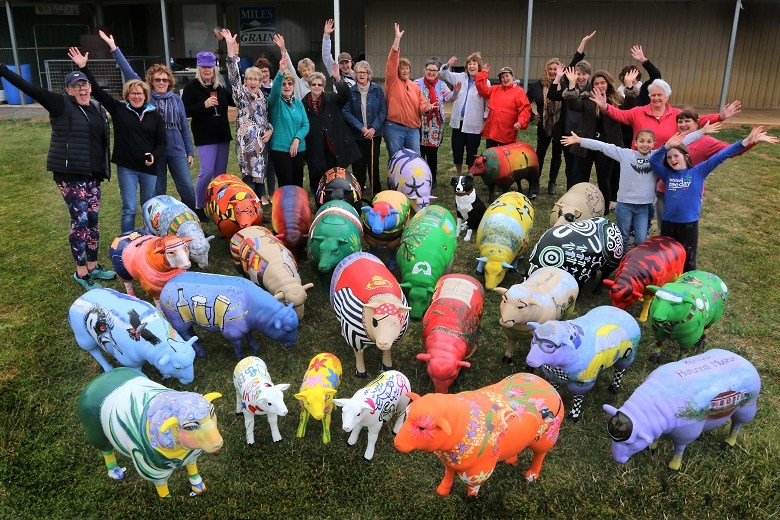 Taping into its sheep farming heritage has helped of Kaniva, a small town on the far west border, survive and thrive after being battered by population decline, recurrent drought and most recently, Covid-19.

Helen Hobbs, secretary of the Kaniva District Progress Association, says the town, which has a population of just 800 and is the last stop before the South Australian border, was devastated by the pandemic.

“The town was really badly hit by the SA border closure,” she tells Government News.

“There were a number of businesses that closed because they just could not operate without the highway through traffic.”

But thanks to the town having in place some innovate initiatives, such as its internet-famous flock of painted sheep, by the time the border had reopened it was “bumper to bumper” Ms Hobbs says.

The sheep art project is a 900 metre trail of fibreglass sheep that have been painted by community members and connecting other tourist landmarks in the town to the main street.

Each sheep tells a story and has a QR code linking to a specific group or place, whether it’s the Bowling club, the heritage railway station or a local café.

The community got its first serious warning that it was in trouble in the early 1990s from Peter Kenyon, director of the WA community and economic development  consultancy Bank of I.D.E.A.S.

“It was before my time, but he basically said ‘you guys have got to get it together because if you don’t you’re going to die’,” Ms Hobbs says.

The Council embarked on putting together the ‘windmill corner’ with public toilets, information centre and café, but the sheep art was the thing that really changed the town, Ms Hobbs says.

More than a coffee stop

“Prior to that it really was the town that you just stopped at on your way through, and you might have gone to the toilet and had a cup of coffee.

“In 2010 a local artist Sharon Merrett took inspiration from painted cows in Shepparton and Sheffield in Tasmania, and saw how art had revitalised the towns there, and thought ‘that’s what we’ve got to do’.

The community scraped together enough money from donations and fund raising to get the first 20 painted sheep, and by 2019 the full flock of more than 55 sheep and two sheep dogs had gone viral on social media.

With a single sheep costing about $700 by the time it’s painted and cemented to the pavement the program is run on a shoestring and funded by small grants and donations.

But Ms Hobbs says it’s a testament to how a sense of identity can inspire resilience.

She’ll talk about the project at the Place Branding Australia Conference in June.

“You’ve got to think, ‘what is that one unique story that the community is most proud of’,” she says.

“This town is really proud of its farming heritage, it’s known as the Durum wheat capital of the whole of Victoria and it basically derived its whole wealth from sheep and farming, and then you’ve got the connection to the windmill . These were ideas that resonated with people.”

Ms Hobbs says Kaniva’s experience shows how local governments can to tap into their communities to make place branding work.

“Communities are in the best position to know what they actually need,” she says.

“So when communities come up with their own ideas, and are willing to put their own manpower behind it, it’s about asking who are these groups that are actually out there trying to do stuff, and how can we help them?”

Place Branding Australia 2021 will take place at the Hotel Grand Chancellor in Hobart from June 16-18.

For information and registration visit the Place Branding Australia website.