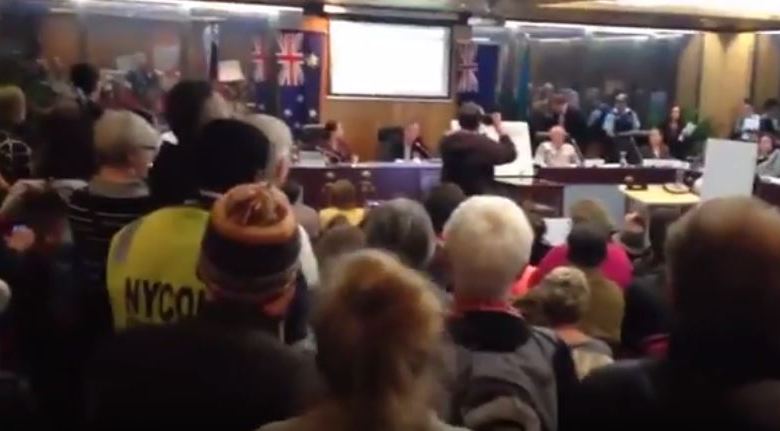 The first meeting of Sydney’s new Inner West Council was abandoned last night (Tuesday) after a protestor spat on Administrator Richard Pearson and another knocked his papers to the ground.

Several hundred residents turned up to the meeting at Petersham Service Centre, livid over the forced merger of Ashfield, Leichhardt and Marrickville Councils and the mass sacking of mayors and councillors earlier this month.

Dulwich Hill resident Kate Wake said there was a police presence but organisers had clearly underestimated the number of attendees and the strength of the anger provoked by forced council mergers and the approval of WestConnex.

“It was pretty powerful, and confusing. They weren’t expecting such a crowd, I think,” said Ms Wake.

She said the rest of the crowd did not support the behaviour of the two protestors towards Mr Pearson and that former councillors and mayors were frustrated that they did not get the chance to discuss important local issues.

“That was assault, both of them,” Ms Wake said. “Richard Pearson couldn’t speak. Nothing could be done. You couldn’t conduct any business. There was nothing to fight against.”

Draft budgets, service provision and the composition of local representation committees were all on the meeting agenda but Mr Pearson did not even get to finish the Welcome to Country.

She said it did not help that the new Inner West Council logo resembled a “big blue Liberal-style” logo or that people had felt the meeting was deliberately kept secret.

“Talk about rubbing our noses in it,” Ms Wake.

Mr Toole said he was disgusted by the intimidation and spitting that Mr Pearson had to contend with, calling it “a mob mentality.”

He would not say whether police would press charges against the two protestors. He insisted that meetings of new councils were going well in other areas and insisted that the date of the September 2017 local government elections for newly merged council would not change.