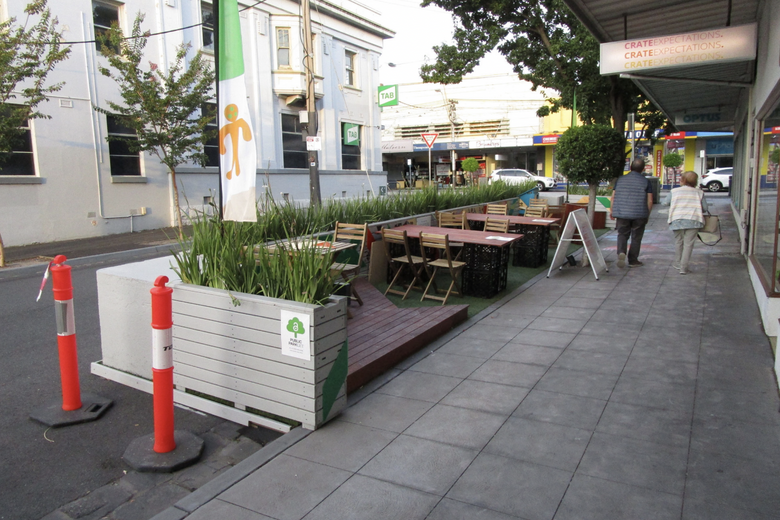 The playful parklet occupied a space in Malvern for four weeks without any negative impact, a study has found (supplied image by Stonnington Council)

The RMIT study focused Stonnington Council’s ‘Playful Parklet’, a portable space installed in a kerbside parking area in the Melbourne suburb of Malvern over February and March 2022.

A newly released research report uses the project to assess the practicalities of establishing portable community parklets, potential uses, and the benefits they can bring.

The project was a collaboration between Council, RMIT, and landscape installation company GreenEvent.

The idea of community parklets originated in San Fransisco around 2005 with urban guerrilla projects aimed at reclaiming public space.

The report describes parklets as a “micro-level manifestation of (the) rethinking and re-evaluation of cities” and says they represent a movement to counter the dominance of cars in cities by temporarily reclaiming parking spaces for public use.

“The pandemic led to a decrease in cars and a need for more street space because of social distancing,” says RMIT’s Associate Professor Quentin Stevens.

“Hospitality was also suffering, so this model took on a new life and economic importance.

“Parklets have moved from being a sort of tactical intervention to being a strategic top-down tool done in collaboration with local community actors,” Professor Stevens told Government News during a research trip to Germany, where the local government in Berlin last month agreed to spend $500,000 to install 100 parklets.

Professor Stevens, from RMIT’s school of architecture and urban design, was researching interventions in public space including parklets when he got involved in the Stonnginton project.

Together with his colleague Troy Innocent from the university’s Future Play Lab, he started exploring play as a public activity.

“I said, why don’t we make a parklet not just for hospitality but for play? We wanted to try it out and find like-minded councils, and Stonnington was a good fit.”

It was 12 metres long and 1.9 metres wide and designed to occupy two kerbside parallel parking spaces.

The parklet was customised by adding a low stage, two benches, and small planter boxes.

The space for used for a range of activities including interactive busking and street art, board games and mini-parkour workshops and maintained by Stonnington Council staff.

The total cost of the playful parklet came in at $10,660. A breakdown shows the cost of the standard shell was $6,800, with $3,860 for cusomistion, $5,470 for decorations and furnishing, $4,280 for transportation. Activation costs were $500 per installation for artists and $350 per performance by musicians.

The researchers showed this was relatively low compared to commercial parklets, which can cost businesses more than $50,000.

“We could feed it into our existing cleaning and maintenance schedule in that area, so it was no real imposition,” she said.

No impact on parking

The report found the parklet could be rapidly deployed and modified, and redeployed in to fit different urban contexts. It also found it enchanced social activities without impacting on business parking or traffic.

“One thing that was suprising was that there were no concerns about the parking,” Professor Stevens says.

“But we chose a street with off street parking, and but it gave good visibility as people left their cars.”

Ms Lara also said the lack of complaints was an unexpected surprise.

“We always brace ourselves for some, but there were none,” she said.

However, the study found that at time public engagement wasn’t great.

Researchers recorded a maximum of 100 movements in and out of the space per hour, but there was only a total  of 2000 entries and exits while the parklet was in place.

“Passers-by were generally hesitant to enter, explore, and engage with the playful parklet when they first encountered it,” the report found.

“The project challenged people’s understanding of the “what” and “where” of public space”, and there was a perception that parklets belonged to hospitality.

The report says Stonnington’s project serves as a prototype for  researchers, artists, organisations, and local councils in other cities around the world to replicate.

“Simply by repurposing parking spaces for outdoor dining and social gathering and incorporating green elements, like plants and potted trees, parklets show how cities can be made more sustainable and healthy through small-scale interventions,” it concludes.

Professor Stevens says the study shows parklets are quick, cheap and can be modified as you go.

“That’s a plus for planning,” he says.

“For local government, rather than have a long term strategic plan to do a big expensive project, you can put a few thousand dollars in, get a few other actors to put some money and sweat into it by donating, time and materials and space activators, and tweak it as you go.

“They’re not proposed as a permanent solution in a fixed location. They are by their nature supposed to be lighter, quicker, cheaper and mobile.”

Stonnington is currently exploring extending the use of portable parklets to more locations and over longer periods of time, Ms Lara says.

2 thoughts on “Report looks at potential of playful parklets”