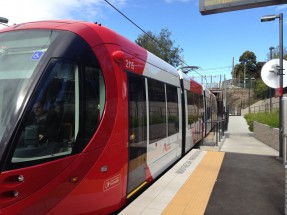 Australia’s peak rail group has sent a strong signal to political parties of all persuasions that any promises on trains and tracks made during the New South Wales state election campaign will be heavily scrutinized well after the polls close on Saturday.

With big ticket infrastructure pledges like a second Sydney Harbour rail crossing put on the table to try and woo voters into supporting the sell-off of the NSW electricity networks ‘poles and wires’ the Australasian Railway Association (ARA) has started keeping a tally of pledges to try and get some follow through on electoral promises.

“The rail industry has released its key election platforms for rail and now we hope to work with the government elect in ensuring our concerns are registered, priorities pursued and action is taken,” said Chief Executive Officer of the ARA, Bryan Nye.

“I applaud the strong commitment from all parties, in particular the Baird Government, regarding passenger rail funding for projects such as the second Sydney Harbour crossing and the Western Sydney light rail project, both of which were outlined as priorities in our key platforms document.”

While so-called law and order auctions used to be the staple of state government elections, the Baird and O’Farrell government’s conspicuous success delivering and reforming infrastructure like the relatively trouble free rollout of the Opal public transport smartcard and the opening of the light rail extension to Sydney’s inner west have given commuters a more tangible bang for their buck in terms of the daily quality of life.

Once derided as novelty and boutique infrastructure by parts of the tabloid and talkback media, the conspicuous success of light rail’s revival in Sydney has prompted councils in the city’s West to agitate for their own infrastructure to break bottlenecks into centres like Parramatta that are now facing sharply increasing population density and the congestion that goes with it.

However the peak rail group has taken issue with the neglect of freight rail, especially its links to intermodal terminals like ports.

“I am . . . disappointed to not see a greater commitment across the board for rail freight, in particular infrastructure investment for long and short haul rail in the state’s mining and agriculture industries, through key policies such as duplicating the Port Botany rail line upgrading existing regional freight lines and connections to the planned Inland Rail network,” Mr Nye said.

“The Baird Government, to their credit, took a great initiative in delivering a comprehensive NSW Freight and Ports Strategy back in November 2013 and we would like to see more of the recommendations implemented, the separation of passenger and freight movements is another key priority for rail.”

Local jobs are also a key focus for the group.

“With new projects, come new trains and new technologies, therefore we would also hope to see benefit brought to the local manufacturing industry with a strong focus on stimulating the local economy and in turn creating jobs and a stronger future for rail manufacturing in Australia,” Mr Nye said.