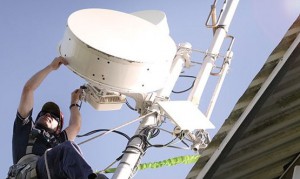 Once regarded as analogue era technology, two way radio is enjoying a resurgence of popularity  as it switches over to digital and internet protocol ‘packet enabled’ systems that use lower frequency bands and can provide wider area coverage than mobile phone cells.

Vertel says it’s investing $10 million into new infrastructure investment over the next three years to get services into places the company’s managing director Andrew Findlay says are “under serviced by major telcos.”

A big part of the sell is guaranteeing redundancy for critical services, like health, emergency management authorities and education providers that necessarily need to have secondary communications systems in the event of adverse weather events or natural disasters like fires.

One of Vertel’s points of difference from mainstream carriers is that it uses carrier grade microwave transmission to trunk its network making it more resilient because there are far fewer poles and wires to wash away or be burned down.

The company says that after designing and testing this network for the past year it had selected Christchurch New Zealand based Tait Communications as a key equipment provider to help deliver the new network.

(Having generated a near cult following in radio spectrum circles, Tait has remained in business and impervious to take-overs thanks to the company’s restructure as a charitable trust by its late founder Sir Angus Tait, who maintained a dogged philosophy of reinvesting almost all its profits back into research and development with a major beneficiary being electronics and ICT research at the University of Canterbury.)

Mr Findlay said it was “when things go black” that communications users realised what was not there.

Most state governments have for decades operated their own dedicated Government Radio Networks to service everything from police and ambulances to public transport and other fleet users.

However even with the proliferation of mobile broadband services from consumer-based telcos snapping away at the GRN market, many critical response and infrastructure services have expressed growing concerns that they could be exposed to congestion and outages during periods of peak or extreme demand if they are forced to rely solely on public networks.

Vertel believes that it’s found a sustainable niche upgrading previously analogue networks in regional areas to new DMR technology that can not only support ‘push-to-talk’ functionality but also carry digital services data like location services and SCADA- services that are the mainstay of industrial communications for critical infrastructure like water and power as well as other industrial applications.

“We really want to target councils as an anchor customer,” Mr Findlay said.

He stressed that existing radio users did not have to replace their existing fleets because multi-mode radios worked across both digital and analogue networks. This meant that migration over to digital radio could be done gradually rather than in one disruptive hit.

In the first phase of Vertel’s rollout, the new DMR Tier III will support Newcastle, Wollongong Sydney and surrounding areas.

One thought on “Radio resurgence dials into Telstra’s badlands”