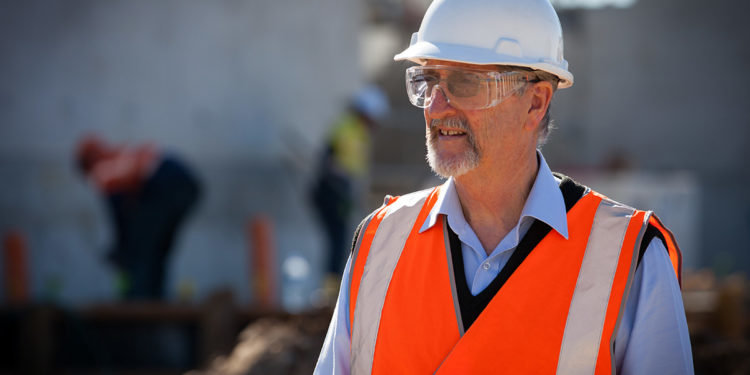 Mr Ross has had four decades as a water engineer, manager and leader and has navigated population growth in south east Queensland, local government amalgamations and drought, as well as water reforms which saw local government take responsibility for water service and infrastructure.

The Australian Water Association described him as “one of the quiet achievers of the Queensland water industry” and a calm, strategic, compassionate voice across his 43 years as a water engineer and leader.

After starting his career with Fiji’s water support department in 1984, he worked for the Queensland state government and later took on leadership roles in local government.

In 2005 he was appointed Project Manager, Regional Drought Strategy for what was to become the Queensland Water Commission, where he coordinated drought response for 13 councils and helped implement the state’s first regional framework.

Steering the way through upheaval

He joined Logan City Council in 2007, at a time of major upheaval in both water policy and local government.

“We were in an amalgamation phase as well as a complete water reform phase for Logan,” Mr Ross told Government News.

“We inherited new growth areas and we had to establish the water and waste water infrastructure to support the establishment of those regional cites.

“It was pretty much a blank canvas. There was no waste water strategy for potentially 300,000 people.”

The partnership, now known as the Logan water partnership, is one of the largest water infrastructure delivery programs in Australia, capable of delivering in excess of $80 million worth capital and renewal works annually.

It has already delivered more than $500 million of services since 2009.

Among these is the Cedar Grove Environmental Centre, Queensland’s first environmentally sustainable waste water plant and one of the most sustainable in the nation constructed on a 204-hectare site located between the Logan River and Cedar Grove.

Mr Ross lists it among his proudest achievements.

Under licensing conditions, a “net environmental benefit” had to be achieved so the site contains constructed wetlands, vegetation corridors, community facilities, a Landcare nursery, a solar farm and 34 hectares of biodiversity offsets. It uses membrane bioreactor technology to produce low-nutrient effluent.

“We received the growth areas with no waste water solution and came up with a sustainable environmental solution for an inland catchment,” Mr Ross said.

“We had to come up with an outcome that met with very strict environmental standards and we used it as a mechanism to catchment improvement.

“We’ve turned around the community from being up in arms about having a waster water plant in their neighbourhood, to having something the community is proud of.”

The facility is set to become fully operational within the next month.

Another proud achievement is the award-winning $3 million Round Mountain Reservoir, an Australian-first solution to managing drinking water quality in a remote location.

“Effectively we had a major reservoir that needed to be able to provide disinfection but we didn’t have an access road and basically there was no power to the site. That’s why we came up with a solution that used solar and salt,” Mr Ross said.

The off-grid electro-chlorination facility is powered by solar panels and a Tesla battery and uses high purity salt to disinfect the water supply.

It was named the IPWEA Queensland Division Project of the Year in 2018 and it has attracted interest from communities around Australia.

Once complete, the $18 million project will be the first time gasification has been incorporated into a wastewater treatment plant in Australia and it will help to reduce the volume of sewage sludge waste disposal at Logan’s largest sewage treatment plant by about 90 per cent.

Pilot trials are underway and the facility is set to be fully operational by July 2021.