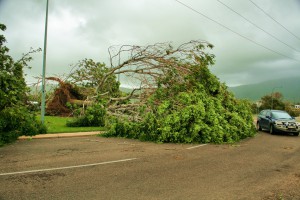 Queensland’s councils and its state government have finally won their important and protracted battle to be allowed to use local labour on federally funded disaster relief and clean-up programmes instead of hiring-in more expensive external contractors because of Canberra’s spending rules.

The conspicuous backdown by federal authorities means that local governments in the state will now be able to provide   and be reimbursed for   so-called council ‘day labour’ instead of trying to find more expensive outside companies while locals sit idle.

The issue of councils being forced to use external contracting as a purchasing mechanism under the Natural Disaster Relief and Recovery Arrangements has been a point of visceral anger in many ravaged communities because it often means that people put out of work by natural disasters can’t even apply for temporary jobs to help restore their own communities.

Inflaming that sentiment has been the fact that hiring in external contractors is usually much slower and significantly more expensive than using council day labour, meaning that relief dollars don’t go as far and vital repairs take longer than they should.

The effect has been that the rules slow down physical and economic recovery when the complete opposite is intended. They have also inflamed anti-Canberra sentiment in many communities that believe the federal government is badly out of touch with what communities need.

The Local Government Association of Queensland has been on the warpath in Canberra over the bizarre spending criteria that its president Margaret de Wit has cited as a prime example of “bureaucratic rigidity”.

Ms de Wit thanked Prime Minister Tony Abbott for finally showing common sense on the issue, noting that Queensland government figures showed the use of council day labour rather than contract labour to clean up after floods and cyclones over the summer of 2011 and 2012 saved taxpayers $160 million.

Also getting kudos is Queensland’s Deputy Premier and Local Government Minister Jackie Trad, who Ms de Wit said had been “taking the fight up to Canberra.”

Ms Trad, who is presently acting Premier, welcomed the decision to reimburse councils and said councils they now had the certainty needed to get on with the job of rebuilding in the wake of Cyclone Marcia and Cyclone Nathan.

However she was less flattering of the amount of time it took Canberra to compromise.

“Councils told me that external contractors were often not available to undertake work in remote communities and these contractors could not offer value for money to taxpayers,” Ms Trad said.

“Four months after Cyclone Marcia devastated Central Queensland the federal government has finally agreed to allow local councils to use their workforce to undertake reconstruction works.”

The Acting Queensland Premier said the Abbott Government had been provided with an independent report that showed significant savings from the day labour trial of 2011 and 2012 works.

“Unfortunately the Abbott Government and the former Newman Government allowed the trial to expire in 2014 which meant when the cyclone hit the National Disaster Recovery Relief Arrangements prohibited the use of day labour,” Ms Trad said.