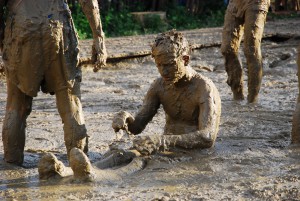 It sounds like another day at the office in New South Wales local and state politics – but Queensland’s elected representatives are fast showing they won’t be upstaged by slimey Southerners when it comes to mud-slinging during the state’s council election season.

Voters preparing to head to the polls on March 19th were on Thursday greeted by a desperate plea from the peak body representing councils up North, the Local Government Association of Queensland (LGAQ), for state politicians to stop dragging their sector’s name through the mud for their own ends.

The body’s chief executive, Greg Hallam said the community there was “sick and tired of negative and sleazy election campaigning” and warned a number elections were “in danger of being hijacked by those who believed spreading lies and falsehoods about their political opponents was the key to success at the ballot box.”

It’s an admirable sentiment, but in reality Queensland councils and councilors are battening down the hatches for what many anticipate will be one of the ugliest, meanest and dirty election seasons in recent history after the trouncing of the Campbell Newman LNP state government after just one term.

With just a couple of weeks to go, there’s still plenty of potential for reputational damage to be done to the local sector (which often acts as a training ground for state politics) and its advocates are worried.

Intra-party brawling has also broken out. The war of words over councils is being propelled in part by Cairns Labor MP Rob Pynes, who has been pushing hard for an inquiry into the local government sector that he claims is rife with workplace bullying.

Having tabled hundreds of documents in Parliament since October, Mr Pyne’s ongoing campaign from within the Labor Palaszczuk Government has proven particularly irritating for both the Premier and her Deputy Premier and Local Government Minister Jackie Trad, who hold on to power in the unicameral parliament by the thinnest of margins.

On Tuesday Mr Pyne hit Twitter over the conduct of councils, tweeting “Is our Deputy Premier acknowledging Council corruption? You set the LG rules Jackie and those rules must change!”.

So far the Palaszczuk government has rebuffed the calls for a formal inquiry into councils, but the image of local governments there has been further dented by what Mr Hallam said were claims “made in the context of the elections that are plainly aimed at damaging individual reputations and smearing councils.”

Like NSW, some councils and councilors aren’t exactly enhancing their own reputations.

On Thursday national broadcaster the ABC reported that a $3.3 million deal to sell land by Brisbane City Council without a public tender or auction to a donor of the LNP – which holds the council – had been referred to Queensland’s Crime and Corruption Commission.

According to the ABC report, both the Lord Mayor of Brisbane, Graham Quirk, and the buyer maintain that the sale was above board and went through the proper channels, despite Local Government Minister Jackie Trad later sinking the sale by refusing an exemption from the regular sale process.

However the very revelation of the referral to the CCC in itself has prompted claims of deliberate leaking to damage political opponents in the Queensland council elections.

While referrals to the NSW Independent Commission Against Corruption (ICAC) are routinely disclosed by both politicians and administrators, Queensland’s referrals are usually kept confidential thanks to history of referrals to the watchdog being used for vexatious and political motives.

One important aspect of the election lost among the mudslinging is that Queenslanders will – slightly confusingly – also be voting in a referendum for the length of term for the state government and whether or not to keep it at a fixed date every four years.

While there is broad bipartisan support to keep the current system, it’s much less clear how voters will react after the tumultuous years of the one term Campbell Newman government that was thrown out in the biggest landslide in Australian electoral history.

The piggybacking of the referendum, which spares the government the cost of a separate vote, is understood to have prompted fears in some councils that ballots for the referendum will be counted before those cast for councilors.

The LGAQ’s chief Greg Hallam is urging all participating in the election to keep campaigning civil and above board.

“It’s time to stop the rot and remember that a clean election campaign is the only good campaign in the minds of the community,’’ Mr Hallam said.

Good luck with that.