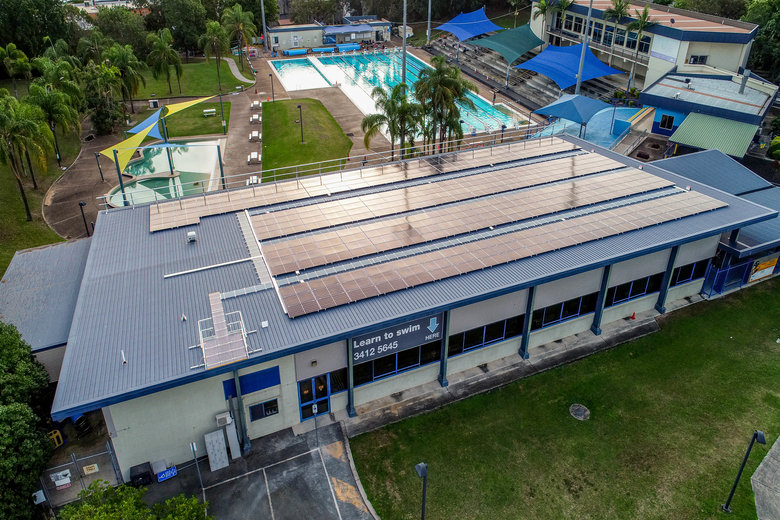 The combined power generation from the 25 systems is expected to save an estimated $140,000 a year in electricity costs and reduce CO2 emissions by more than 930 tonnes, City Planning, Economic Development and Environment Committee Chair Councillor Jon Raven says.

The latest installation is a 100kW system on the roof of the Logan North Aquatic Centre featuring 303 solar panels, and systems have also been installed at sports centres, libraries, community centres, water treatment plants and a council depot.

Many of the sites use “power optimisers” which allow remote monitoring of the power generation of every solar panel.

“Embracing solar is good for the environment and for the bottom line. We’re also supporting the renewables industry, which is creating jobs in Logan.”

Council’s first ground-based solar PV system has been installed at the Cedar Grove Environmental Centre with a capacity of 150kW.

Loganholme waste water treatment will get a 1000kW system which will come on line in 2021-2022 and is estimated to produce around 2000 MWH per year.

Council’s $944.2 million Budget handed down on Monday allocates $308,000 to install a 200kW system on the roof of the Council Administration Centre in Logan Central.

It’s forecast the system will save Council an additional $38,400 in annual electricity costs and reduce CO2 emissions by a further 250 tonnes per year.

In addition, more than 41,000 solar PV systems have been installed on residential, commercial and community buildings across the city representing more than 184 megawatts of capacity, Cr Raven says.

The announcement comes as new research from the University of NSW debunks arguments that the transition to renewable electricity will harm the global economy.

Instead, the research published in the journal Ecological Economics argues the change to a renewable energy future will have environmental and long-term economic benefits and is possible in terms of energy return on energy invested (EROI).

The research, which focused on wind and solar renewables, analysed dozens of studies on renewable electricity systems in regions where wind and/or solar could provide most of the electricity generation in future, such as Australia and the US.

“Critics claim the world’s economy would suffer because they argue renewables require too much lifecycle energy to build, to the point of diverting all that energy away from other uses,” leader author Honorary Associate Professor Mark Diesendorf said in a statement.

“Our paper shows that there is no credible scientific evidence to support such claims.”

Much of the current criticism of renewable energy was based on outdated data, he said.

“We found that the EROIs of wind and solar technologies are generally high and increasing. T ypically, solar at a good site could generate the lifecycle primary energy required to build itself in one to two years of operation, while large-scale wind does it in three to six months.

“This could be supported by government policy, which is indeed the case in some parts of Australia – including the ACT, Victoria and South Australia – where there’s strong support for the transition,” he said.