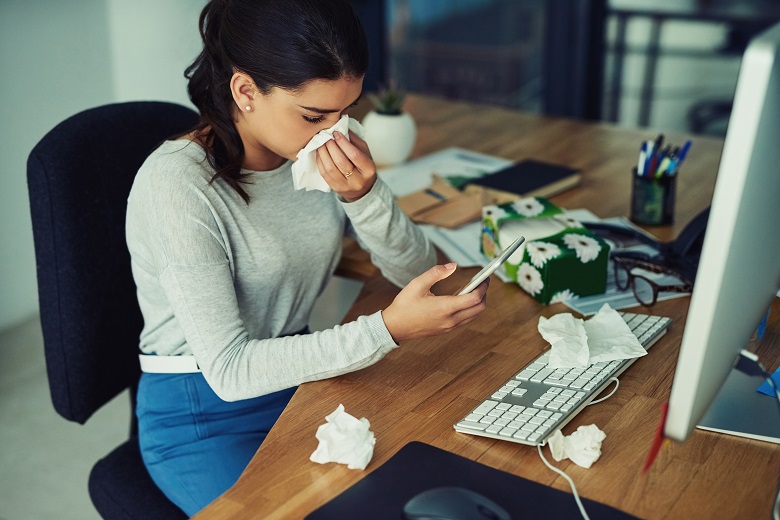 A survey has shown high rates of presenteeism among women in the public sector, but unions believe coronavirus is changing behaviour.

A survey of women by the union representing public sector employees has found high rates of presenteeism, with 86 per cent of women continuing to go to work while they are sick.

The CPSU’s latest What Women Want Survey  last year questioned at total of 6,387 women in the public sector.

The survey found nine in ten women had gone to work while sick in the last 12 months.

More than 52 per cent said they did this because of workload pressures and many (54 per cent)  felt they thought they weren’t sick enough to stay home.

There was also a steady increase in the number of women who went to work because they said they didn’t have enough sick days, or because of more onerous medical certificate requirements since 2013, the report said.

The survey was conducted before the declaration of the COVID-19 pandemic and the CPSU believes the coronavirus outbreak has led to a change in behaviour.

“I think people are being sensible and following the advice,” a spokeswoman told Government News.

According to APS Commission guidelines, employees diagnosed with coronavirus should be given access to personal sick leave and employees caring for a child or member of their household are eligible for carer’s leave.

Those at risk of exposing the virus to others should consider working from home during a quarantine period and where this is not possible they should be paid miscellaneous leave.

The CPSU spokeswoman said while the guidelines are satisfactory for fulltime employees there are serious concerns about the lack of advice and leave options for the almost 30,000 casuals, contractors and labour hire workers across the nation, including those who worked in large call centres.

“We’ve called on the government and the APSC to make sure they’re going to support those staff with the same miscellaneous leave that they’ve indicated they will support APS employees with, but they haven’t come forward,” she said.

“That’s a major concern. Obviously it’s not just a matter of equity – it’s a public health response. We don’t want people going to work in those circumstances if they should be staying home.”

The survey showed that women want more flexible work arrangements and that their ability to balance work and non-work commitments is continuing to decline.

It also found a continuing encroachment of work into private lives with one in three women responding to contact outside of work at least once a week.

The Average Staffing Level cap was contributing to a lack of flexibility and growing job insecurity in the public sector, the union says.

Meanwhile, the report showed more women are experiencing bullying and harassment with a quarter of those surveyed saying they had experienced it in the workplace.

Three in five who reported bullying or harrassment said they were not satisfied with the response from management.

One thought on “Presenteeism a problem for public sector women”