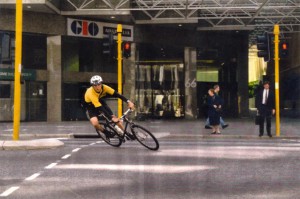 Western Australia’s largely flat and mild weathered capital of Perth might be prime territory for a cycling revolution, but its 2014 master plan to get citizens using a city-wide bike path network is already being badly let down by a lack of informed planning and sustained funding.

That’s the grim conclusion of the Western Australian Office of the Auditor General whose report into “Safe and Viable Cycling in the Perth Metropolitan Area” has taken serious issue with the slow progress of the Western Australian Bicycle Network Plan 2014 2031 (or WABN Plan) that was supposed to facilitate the rollout of a citywide network and cycle ways firmly on the map.

The report is a loud wake-up call for councils and the state government in the West as Perth battles increasingly congested roads.

The big idea behind the original WABN Plan was to make cycling in WA “safe, connected, convenient and a widely-accepted form of transport” with the WA Department of Transport (DoT) coordinating the activities of agencies in delivering cycling facilities.

However the Audit found that less than half (48 per cent) of a previously planned ‘Principal Shared Path (PSP) cycle network’ has been completed. And of the existing routes, the Audit observed that many sections “lack connectivity, and older paths need upgrading if they are to cater for increasing demand.”

A major deterrent to successfully promoting cycling as a mainstream transportation mode is poor connectivity between designated cycleways, especially where riders are forced into the flow of vehicle traffic creating dangers for all concerned.

To avoid that life threatening scenario, the WA Department of Transport and councils were supposed to conduct a review of local cycling routes, including in Perth’s CBD — but authorities are yet to mount-up.

“A planned review of local routes, including within the Perth Central Business District (CBD) needs to be completed. Local government roads and paths vary in design and level of maintenance, which do not always comply with relevant standards and good practice guidelines. This creates conflicting and less safe conditions for cycling,” the Audit report said.

There is also real concern that the lack of momentum could see the project stall.

“DoT has not yet compared the economic, environmental, health and social benefits of cycling with other transport options,” the Audit report said.

“DoT has also yet to complete a detailed implementation plan for the WABN Plan and transport agencies have not outlined funding requirements for each of the key actions. This is likely to jeopardise the timely completion of a well-connected cycle network.”

The report also observed that historically cycle routes that connected with the Principal Shared Network haven’t been well planned and vary in their design and construction.

“The result is an inconsistent and unconnected local cycle network which lacks integration into the broader transport system,” the Audit said.

The poor report card has also resulted in the WA government being told to hurry up and get its act together.

The Auditor has recommended that the Department of Transport “prepare and publish a WABN Plan implementation schedule with funding requirements, and a progress report on WABN Plan actions” within just six months.

Transport authorities have also been told that they should put in place an improved strategy “to collect, monitor and analyse data on cycling participation to inform planning and safety.”

Over the next two years Transport has been told it should:

•    Identify demand for transport options to inform and finalise a transport planning framework for Perth, which integrates all forms of transport;

•    Progress the review and development of Local Bicycle Routes with LGAs

The Audit recommended that within the next five years “DoT and Main Roads should support and promote existing and new cycling infrastructure, including innovations trialled by LGAs, to improve participation in cycling.”

Perhaps anticipating the critical review, the WA State Government released its blueprint for Perth’s new $27 million cycling network on the same as the Audit report – which fortuitously happened to be Ride2Work Day.

The plans flesh out an expansion of cycling and pedestrian infrastructure the WA government says is part of its Western Australian Bicycle Network Plan 2014-2031 “which guides the continued delivery of cycling infrastructure to meet the need for convenient safe cycling routes.”

Specifically, the WA State Government said the $27 million $27.07 million would be spent on expanding the network of principal shared paths at key locations that include:

“The growing success of cycling in Western Australia is shown by a 34 per cent increase in the number of cyclists using our cycling and walking paths since 2011,” WA Transport Minister Dean Nalder said.