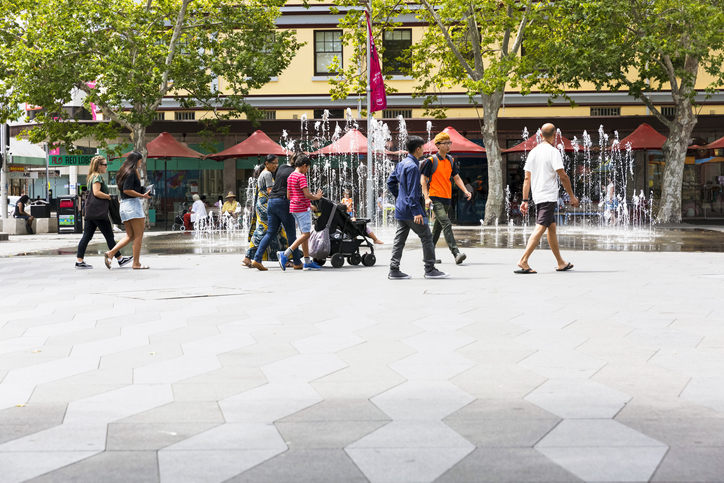 Parramatta Council will boost greenery and shading across the city as part of broader efforts to drive down temperatures in the city by up to two degrees.

The cutting-edge technology enables council to ‘visualise’ the impacts of the installation of shading structures, greenery and water features on these heat spots.

Installing cooling structures such as these can improve comfort by 50-60 per cent, according to the study.

Situated in the city’s west, temperatures in Parramatta soar well above average in the hotter months, often triggering heatwaves and urban heat islands, with the study finding some asphalt surfaces were reaching above 50  ̊C in unshaded areas.

The study will inform a $4.3 million revamp of Phillip Street, a key thoroughfare in Parramatta, which will see the installation of more trees, wider footpaths and misting units and in the longer term, cool pavements.

City of Parramatta Lord Mayor Cr Andrew Wilson said the study would help improve the liveability of the area by enabling council to effectively manage the city’s hotspots.

“Given Western Sydney can be 5-10°C hotter in the middle of summer than suburbs in Sydney’s east, it is important for us to consider ways in which we can address and reduce the impact of urban heat,” he said.

The research, led by CRCLC researcher Professor Mat Santamouris, is the first of its kind in Australia to use 3D imaging.

“By pinpointing the hot spots through our intense monitoring over a period of time and gathering other relevant data we could then deliver the City of Parramatta with heat mitigation scenarios specific to Phillip Street,” Professor Santamouris said

Centre Chief Executive, Professor Deo Prasad hopes that the tool will be used by other councils across Australia to help guide urban planning as councils grapple with rising temperatures.

“This tool can be used by people without any technical background. You simply click to explore development alternatives and view the potential of mitigation options to reduce the impact of urban overheating.”

3 thoughts on “Parramatta to cool city with ‘heat island’ study”