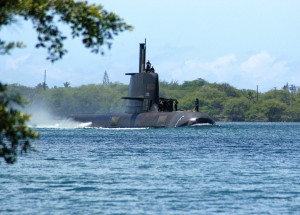 Australia will lose a vital onshore capacity to maintain and repair its own submarines unless the next fleet on order is built at home, the peak group representing the domestic welding industry has warned.

The Welding Technology Institute of Australia on Monday fired a torpedo into the firm possibility that the next generation of subs to replace the Collins Class boats could be fabricated offshore, with the group’s chief executive Geoff Crittenden warning key specialist skills here will be lost for good.

“Submarine maintenance requires highly skilled welders and engineers. We currently have people with the ability to do the task but, without fabrication projects onshore, we won’t retain those people. Australian welders capable of the job will be working overseas or stacking supermarket shelves,” Mr Crittenden said.

“Unless the fabrication is conducted in Australia, repairs and maintenance will be done by welders and engineers flown in from overseas by the prime contractor.”

The prospect of an international Fly-In, Fly-Out (FIFO) workforce for the next generation of subs is a haunting one for local defence industries which are largely dependent on big procurement projects to stay afloat.

With the price tag for the next fleet of subs slated at circa $50 billion, Defence Minister Kevin Andrews has branded the Future Submarine Programme as “the largest Defence procurement programme in Australia’s history.

However the Abbott government has been under sustained fire from the Opposition and local industry, especially in South Australia, over what its procurement strategy will be and what role businesses based here can play in the construction of the new subs.

A core part of the criticism directed at the government’s policy for picking on the new submarines has been controversy over whether a secret deal has been struck with Japan to make the vessels — to the exclusion of Australian industry and other competitors.

With the government taking steady electoral water on the issue, especially over how competitive tendering for the boats will operate, Defence Minister Kevin Andrews on Friday sought to bring the issue to a head by announcing three countries could vie for the build.

“Based on work completed by Defence, France, Germany, and Japan have emerged as potential international partners. All three countries have proven submarine design and build capabilities and are currently producing submarines,” Mr Andrews said.

He added all three nations “will be invited to participate in this competitive evaluation process that will assess their ability to partner with Australia to develop a Future Submarine that meets our capability requirements.”

But the welding industry quickly applied the blowtorch to try and cut out the prospect of the submarines not being fabricated — that is literally put together — in Australia.

“It’s naïve to think we can build the subs overseas and do repairs and maintenance here. If the fabrication contract goes overseas, we’ll never have the skills to build warships in this country ever again,” Mr Crittenden said.

Mr Crittenden cited one unnamed project where key elements were sourced from overseas only to be found to be defective and requiring repair and remediation here.

Problems included major structural components being been spot welded and filled with silicon filler then painted over, he said.

“The project owner would not have had to bear that additional expense if the modules were built here. Australia needs to support skill development and retention to stem our rising unemployment levels. Sending key projects that need skilled labour offshore is short sighted. Use it or lose it,” Mr Crittenden said of local industry skills.

One thought on “Offshore submarine build gets industry blowtorch”