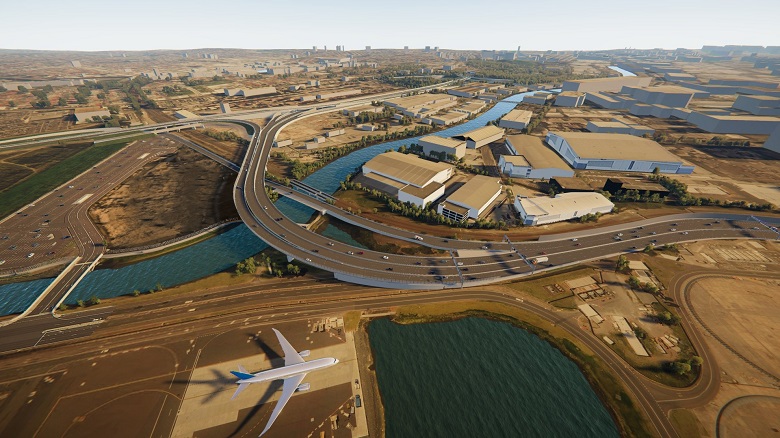 Artist's impression of the new Sydney Gateway road from the airport, looking towards the St Peters interchange.

The state government has moved to the next stage of planning for the proposed Sydney Gateway project with the release of a draft major development plan.

The planned transport infrastructure project will provide a high capacity connection from the Airport and Port Botany to the new Westconnex St Peters Interchange once completed.

Roads minister Andrew Constance says the $2.4 billion road project will facilitate movement of 100,000 vehicles a day and improve connections between the CBS and Sydney Airport and Port Botany.

“This project will improve public transport to and from the Airport by providing faster and more direct access for buses, giving people freedom to choose how they move,” he said.

The state government announced in October that three joint ventures – AirPortConnex led by Salini Impregilo; John Holland and Seymour White Joint Venture; and CPB Contractors – had been shortlisted to proceed to the next stage of bidding to build the Gateway.

The government describes the Gateway as a key missing piece in Sydney’s motorway network and says it will unlock access to the airport and cater for future growth.

The proposed route includes an above-ground toll free connection between the Sydney motorway network and the airport and Port Botany. It will widen Qantas Drive from two to three lanes and provide  a flyover from to the domestic airport terminals.

Infrastructure NSW released a final business case summary in July and the project is currently listed as a high priority initiative on Infrastructure Australia’s priority list.

Sydney Airport is managing the draft MDP, which is now open for public submissions along with the EIS.