The Sydney titling operations of Land and Property Information (LPI) are being put on the market for purchase by private operators with a deal likely to consist of a 35-year long-term concession. The sell-off comes on the back of recommendations of a comprehensive scoping study, initiated in September 2015.

According to the government’s official statement, the valuation services and spatial mapping divisions will not be included in the sale, which employs about 220 people in the regional city of Bathurst. The move has been described by some commentators as a precursor for other public land agencies around the country to follow in a similar stead.

Ms Berejiklian has stated with certainty that the spatial services operating out of Bathurst will remain public: “Obviously the spatial part of the business means you’ve actually got experts who know how to draw the maps, who actually know to provide their expertise in this area,” she said.

[quote]”We took a long, hard look at it and we’ve decided that we believe the spatial services which are based in the central west, should definitely stay owned, run and managed by the government.”[/quote]

“That’s a decision we’ve taken after having a close look at it, and that’s pretty much as final and definite as you can get.”

The Bathurst office employs some of the country’s finest geodetic surveyors, including those responsible for the construction and operation of the world-class CORSNet-NSW, Australia’s most comprehensive CORS network for precise GNSS positioning.

CORSNet-NSW provides precise point positioning for over 99.8 per cent of the NSW population.

While the Queens Square and Bathurst offices are the largest, LPI has additional offices in Albury, Coffs Harbour, Dubbo, Grafton, Lismore, Newcastle, Nowra, Orange, Parramatta, Port Macquarie, Queanbeyan, Tamworth, Wagga Wagga, Wollongong and Wyong- all of which have an uncertain future. 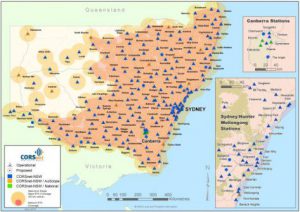 Further details of the division will become available in the near future, however clues were given last month when it was announced at the Association of Public Authority Surveyors NSW (APAS) Conference that LPI will be split into three distinct areas of operations, and that the role of the Surveyor General and the Deputy Surveyor General are also expected to change significantly.

In its official statement, the NSW Government says it will invite the private sector to invest in and operate the titling and registry business of LPI. The net proceeds from the transaction will be invested in new infrastructure, including the development of the Sydney’s major sporting stadiums. It was also announced that one third of the profits would be earmarked for regional infrastructure projects.

“Investment from the private sector in LPI’s titling and registry operations will provide better outcomes for the state,” Ms Berejiklian said. “The private sector will also be better placed to invest in new technology, which will have major benefits for consumers.”

Berejiklian ensures the integrity of the titling system will be protected by a strong regulatory framework. This will include government oversight of any private operator and the continuation of the Torrens titling system backed by the Torrens Assurance Fund.

A new regulator will also be created to monitor and enforce the operator’s service, KPIs and the security of the data. To avoid an unfair price monopoly fees will only be permitted to increase through a consumer price index (CPI) during the 35-year long-term concession.

Gary Ulman, President of the Law Society of NSW regards LPI as one of the best performing land titling services in the world, and claims that the sale is unjustified.

“The justification for the privatisation of public assets usually lies in the need for a large-scale injection of capital into an industry, or to address underperformance by a government utility,” Ulman said, “Neither rationale applies in this case.”

Further details will be announced through Spatial Source and Position magazine as they become available.

One thought on “NSW puts Land Property Information on the block”