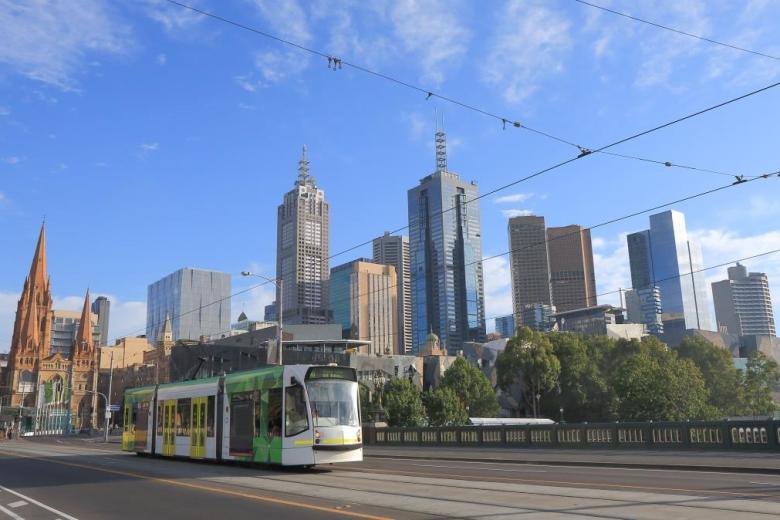 With a rapidly growing population, pressure on the Melbourne public transport network is expected to reach 200 per cent of current capacity by 2031.

According to chair of the transport portfolio in Melbourne, Councilor Nicolas Gilley, the tram running through the center of the city is one of the busiest in the world.

“At peak times at the moment the trams are at capacity. When you have trams on single lane traffic at peak hour sharing with cars, it’s not working well,” he said.

Overcrowding and vehicle congestion are causing trams to spend 17 per cent of their time stopped at traffic lights, according to a recent public transport discussion paper from the City of Melbourne.

Despite having the largest tram network in the world, Melbourne “compares very poorly internationally” with speeds in the lowest 20 per cent of all tram systems, according to Professor Graham Currie, director of the public transport research group at Monash University.

“They are delayed, held back and unreliable as a result and traffic is growing. There is a need to substantially change the right of way for trams on streets,” he told Government News.

The City of Melbourne’s discussion paper, released in April, has recommended the introduction of a Metro 2 network linking Newport to Clifton Hill and a Metro 3 connecting Southern Cross to the airport.

The paper also proposes the introduction of electric buses, bus charging capabilities at stops, traffic priority for buses and trams, more accessible tram stops and the creation of orbital routes to link suburbs.

Professor Currie said that in formulating its 10-year public transport plan later this year, Melbourne needs to follow other major cities by focusing on building metros, minimising single person vehicle use through a charge or pricing while also improving rail, bike and tram networks.

“We should be taking the same approach all world megacities do in central areas when they have eight million people which is restricting car access for anyone who wants to travel on their own in the peak,” he said.

The occupancy of the average car in Melbourne during peak hour is 1.06, the lowest rate in the nation, said Professor Currie.

He describes single occupancy vehicle trips as the second most inefficient use of space second to parking, saying it is getting “less and less efficient over time.”

“The number one priority is public transport in high volumes, the second priority is walking. Commuting by car shouldn’t be encouraged at all in central areas and if it’s causing a problem we should tax them with a congestion charge.”

Professor Currie said that while there are political impediments to road pricing given the density of voters in outer suburbs that use cars to commute, it is a political reality that must be confronted if public transport is to be improved and congestion constrained.

“There are short-term difficulties politically in implementing these policies but my view is we have no real choice,” he said.

Dr Ian Woodcock, a co-author of the City of Melbourne’s discussion paper and convener of the planning and city transport program at RMIT University, agrees that greater focus on improving both bike and tram networks is critical.

“It is other road traffic that causes congestion on trams and the more people who get out of cars and into trams, the fewer vehicles on the road,” he told Government News.

Dr Woodcock pointed to London as an example of a city facing growing population pressures that was able to transform itself following the introduction of a congestion charge.

The charge was introduced more than 15 years ago, and according to Transport for London has reduced traffic by 15 per cent and congestion by 30 per cent.

“The center of London was transformed because of the introduction of a congestion charge.”

Dr Woodcock says that the City of Melbourne has commissioned other consultants to look at the issue of road pricing in an upcoming report.

Both Dr Woodcock and Professor Currie agree that Melbourne Metro 2, which would include a new rail tunnel linking Newport to Clifton Hill via Fishermens Bend with high capacity trains through Wyndham Vale to Mernda, should be commenced as soon as possible.

Although Metro 2 was one of the key recommendations of the discussion paper and identified as a priority by Infrastructure Victoria and the Rail Network Development Plan, the project has not yet been greenlit by the government.

Dr Woodcock said that the Metro 2 is the most “critical project” and needs to commence immediately if it is to be completed by 2028.

Professor Currie similarly said that the Victorian Government needs to prioritise Metro 2 and 3 as they are the most efficient means of managing the volume of commuters in the area.

“The idea of more metros in particular is something we need given the substantial growth we’re having in the inner area and the lack of capacity we have for managing that growth,” he said.

The use of improved technology in tram signaling to reprioritise trams in traffic and the electrification of buses are also welcome and would be  more in line with international practice, said Professor Currie.

According to Clr Gilley, another key priority identified in response to the discussion paper is the need to reclaim more space from parking and reuse for pavements.

One thought on “Mind the gap: Melbourne looks for transport fix as pressure mounts”