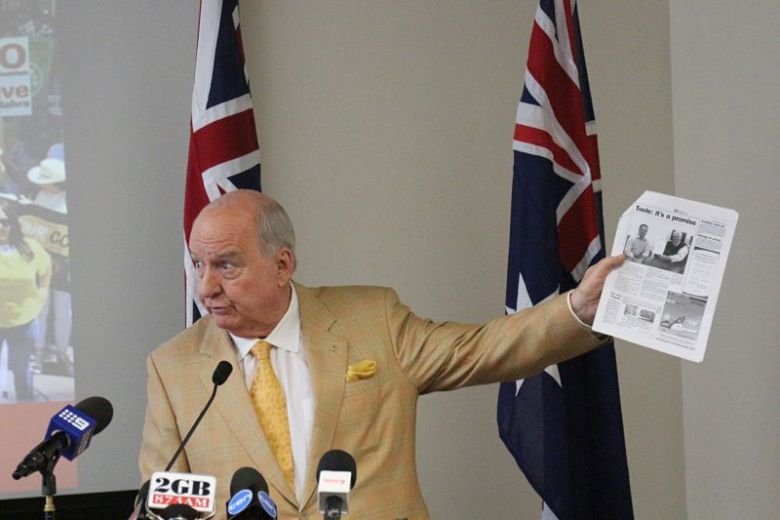 Alan Jones is up for a public fight.

Deep anger over the Baird Government’s summary axing of 45 elected councils continues to burn fiercely after dozens of sacked mayors and councillors descended on Parliament House in Sydney to protest the delay of fresh local government elections until September 2017.

In a dangerous development for Local Government Minister Paul Toole, a Nationals member from Bathurst, the former independent Mayor of Gloucester John Rosenbaum – himself a long term Nationals supporter – made an impassioned appearance at the gathering organised by state Labor Opposition Leader Luke Foley.

“I said here I am today, standing up in a Labor forum, invited to come here, you’ll see that I’m a National Party supporter – that is going to change,” Mr Rosenbaum told Government News.

[quote]“This could do the Nationals a lot of harm. There are a lot of rural people out there who are hurting and it goes all over the state,” Mr Rosenbaum said. [/quote]

Loss of voice and identity

A large part of the anger stems from the fear that smaller communities like Gloucester will lose a local voice or influence over decisions affecting their community once it is subsumed by a bigger entity – the Mid-Coast Council formed out of Gloucester, Taree and Great Lakes.

A town and region on the frontline of community-led legal battles between farmers and the coal seam gas and coal mining industry, Mr Rosenbaum said his community had demanded but never received “a proper financial analysis” on the impacts of the merger.

“We can’t find where our community is going to be financially better off into the future,” Mr Rosenbaum said. “How are we going to have representation in our community [with] 2,500 voters compared to 80,000 over on the Coast? We needed to have more involvement.”

Having stood as an independent, Mr Rosenbaum said voters today were prepared to switch to whichever candidate best represented their interests, including rolling back mergers.

Labor Opposition Leader Luke Foley is dining out on the growing resentment in the ranks of the Nationals core constituency.

“Bringing the state’s mayors together is an important step in sustaining a united effort to oppose the forced merger agenda,” Mr Foley said.

“Mayors across NSW who were elected by their communities were dismissed with a stroke of Mr Baird’s pen. Sacking mayors wholesale and leaving communities without local representation is not the path to better local government.”

While Labor has not opposed the idea of needing to merge some councils for efficiency, Mr Foley has accused the government of using the sackings and new boundaries to gerrymander new councils for his own advantage.

Along with Shadow Local Government Minister Peter Primrose, the core Mr Foley and Labor’s attack has been the extensive period between sacking councils in May and fresh elections in September 2017 – a period during which government appointed administrators will make key decisions, including on planning.

Mr Primrose said some mayors had been sacked by tweet and described the process to date as “a dog’s breakfast.”

“It’s been insulting every step of the way. The community has a right to elected local councils,” Mr Primrose said.

Meanwhile, it wasn’t all bad news for Local Government Minister Paul Toole, who finally won a small victory in the Land and Environment Court over Botany Bay Council which has been legally fighting its arranged marriage with Rockdale Council.

“This litigation has been costly for the council and its ratepayers, with legal bills potentially running into hundreds of thousands of dollars,” Mr Toole said.

He then seized on the misbehaviour of councils like Auburn which was suspended amid concerns over how some councillors, who were also developers, were managing development applications and the sale of council property, sometimes to themselves.

“Many Administrators have moved swiftly to set up Independent Hearing and Assessment Panels to reduce the potential for conflicts of interest to influence planning decisions,” Mr Toole said.

“Councils will no longer be able to assess and determine a development application where a councillor has a pecuniary interest,” Mr Toole said.

“Councillors could also be forced to hand over any financial benefit they have received if they voted in a matter in which they had an undisclosed pecuniary interest.”