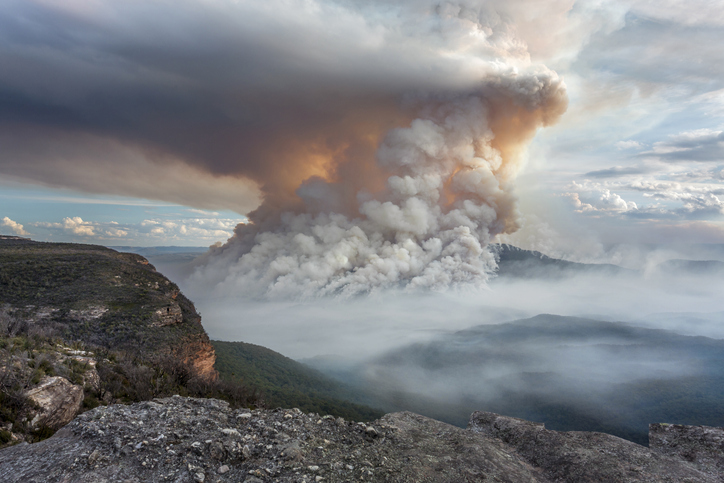 Smoke from the bushfires is choking affected regions and mayors are calling for support to help their communities cope.

As if facing raging infernos in their backyards wasn’t enough, regional mayors are now struggling with the smoke that is choking their communities.

Bellingen Shire Mayor Dominic King says people in the northern NSW community haven’t had a clear sky for three weeks thanks to smoke from the Andersons Creek fire in the New England National Park.

“You couldn’t see the stars, so that’s a good indicator that there’s a blanket of smoke. There’s constant smog,” he told Government News.

“Seeing a blue sky during the day is also something that we’re not seeing, and I‘m not seeing any today.

“The smell’s everywhere, the smell’s on your clothes. I’m sitting in my office now and the air conditioning is pumping smoke in here.”

State of emergency in NSW

His comments came as Premier Gladys Berejiklian declared a week-long state of emergency, the second since the fires began in July.

The declaration will enable the Rural Fire Service Commissioner to exercise extraordinary powers to protect life and property.

“Given the severity of extreme weather conditions … NSW will be in a state of emergency from today,” Ms Berejiklian told a media conference on Thursday.

Cr King said the Premier had no choice but to call a state of emergency and that he would have liked to have seen a more proactive approach.

Blue Mountains Mayor Mark Greenhill says his community is also struggling with heavy smoke with fires burning out of control at Gospers Mountain in the Hawkesbury and Green Wattle Creek in Wollondilly Shire.

Cr Greenhill described coming back from an inspection of areas where properties had been destroyed by the blaze.

“I came back last night and my lungs were burning from the smoke that I’d been breathing in during the day,” he told Government News.

“And I went home to a house full of smoke, as every resident in the Blue Mountains is doing right now and many residents in the Sydney basin.

“The fact is that smoke levels in Sydney and surrounds at present, on and off, are way above what is accepted safe, and constantly way above, day after day after day,” he said.

Wagga Wagga Mayor Greg Conkey said his LGA was better off than some of the coastal regions with the worst of the smoke clearing in recent days and the nearest bushfires some distance away.

But like the other mayors Cr Conkey wanted some guidance from other levels of government in dealing with the smoke emergency.

“It’d be nice to get some advice to the residents of this city as to the dangers that bushfire smoke does cause,” Cr Conkey said.

“We are struggling in terms of our economic ability to do more than what we’re doing. This isn’t our fight but the community is looking to us for leadership,” he said.

Cr King said businesses are already being impacted by the poor air and the situation was also taking a psychological toll.

“People aren’t coming out and having a coffee and going for a drink,” he said.

Cr Greenhill was angry that the state and federal governments appeared to have left local councils to deal with the coalface of the crisis alone.

“There are no guidelines, there’s no assistance, we’re all making do,” he told Government News.

“It’s almost like the other levels of government are just trying to ignore the fact that this is happening.”

Lack of leadership from PM

“It’s a slap in the face, really,” he said. “I certainly wouldn’t think about going on holidays from here while these fires are burning, because that’s what we do as leaders.

“It shows a lack of leadership to be able to think that while everyone’s hurting it’s okay for you to duck off and have a holiday.”

After facing widespread criticism Mr Morrison on Friday issued a statement saying he deeply regretted any offence he caused by taking holidays during the bushfires and would return to Sydney “as soon as can be arranged”.

3 thoughts on “Mayors feel abandoned as they struggle with smoke”