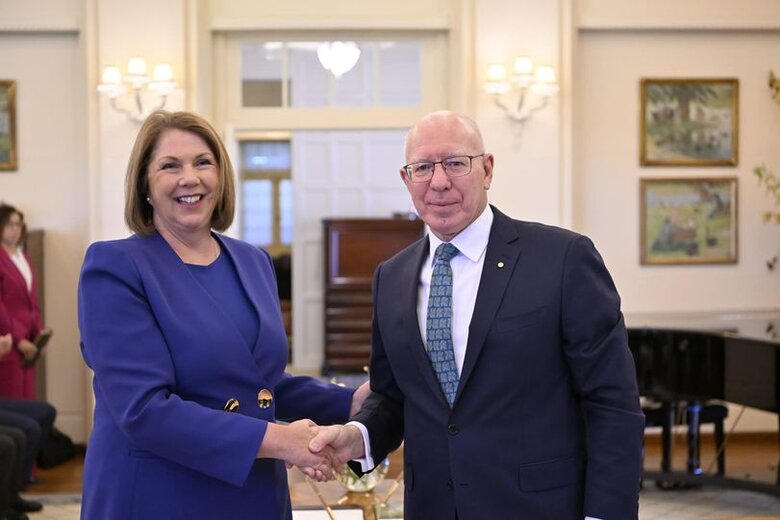 Catherine King is sworn in as the minister for Infrastructure, Regional Development and Local Government

On Wednesday Ms King was sworn in as Minister for Infrastructure, Regional Development and Local Government.

Ms McBain has been appointed junior minister with responsibility for regional development, local government and territories.

Ms King is a former social worker who went on to work as public servant before joining the private sector as a consultant with KPMG.

She entered parliament in 2001 representing the seat of Ballarat and served as a minister in the Gillard and Rudd governments, including as Minister for Regional Australia, Local Government and the Territories in 2019.

Ms King was Labor’s spokeswoman on health, as well as infrastructure transport and regional development in opposition.

Investing in the regions

In a ministerial statement made in March, Ms King said she welcomed investment in regional Australian and acknowledged the impact on them of climate change.

“We want to work with local government, in particular, with regional bodies   … with business groups in regional areas to identify the opportunities for investment and to invest in them, whether that be in manufacturing, in mining, in food production or in tourism,” she said.

Commenting on social media after being sworn in, Ms King said she was proud to be handed a “big portfolio that has a real impact on the lives of Australians from the cities to the country”.

“As the first female federal Infrastructure Minister in the most diverse ministry in Australian history, I can’t wait to get to work with my state and territory colleagues,” she said.

Ms McBain was elected to represent Eden-Monaro in 2020 after two years as deputy chair of the Canberra Region Joint Organisation.

She was Mayor of Bega Shire Council during the Black Summer bushfires of 2019-20.

“This is a portfolio that I am passionate about and I’m really looking forward to getting stuck in and making a meaningful difference,” she said in a Facebook post.

ALGA CEO Linda Scott said the peak welcomed the appointment of two “strong women” and the association was encouraged to see the elevation of local government to Cabinet.

“Both new Ministers know the value of the work local governments do and we can’t wait to work with them.”

CEO of Local Government Professionals of Australia Catherine Carter said she also looked forward to working with the new ministers.

“I am excited about working with the new ministers as an advocate for the local government sector responsible for delivering billions of dollars in federally-funded programs to support local communities,” she said in a statement.

“During the 47th Parliament we are committed to making a positive contribution to the Federal Government’s plan to give a greater voice to local government.”

She said key issues the organsition would be pressing for related to financial stability and workforce shortages.

“Local Government Professionals Australia stands ready to work closely and collaboratively with Minister King and Minister McBain over the next term,” she said.