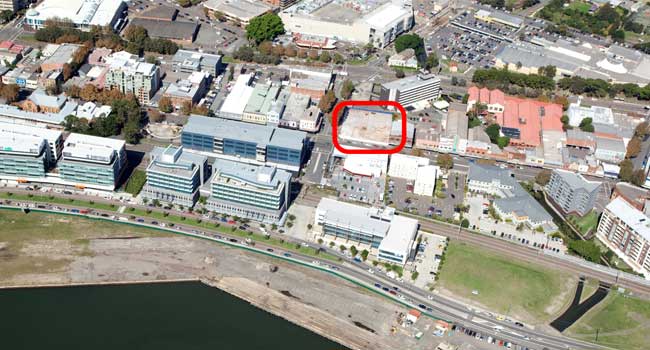 It’s been a blot on Newcastle’s landscape for decades but now the Hunter Development Corporation (HDC) is putting Newcastle’s 2085m2 Empire Hotel site up for sale and calling for developers to submit their proposals.

The prominent site at the corner of Steele and Hunter Streets, where the Empire Hotel stood until it was ripped apart by a fire in 2003 and demolished in 2011, has been vacant for decades and it has remained a hot topic of Novocastrian real estate conversation ever since.

Previously occupied by drug addicts and squatters, it’s a critical site for Newcastle City Council because it’s in walking distance of Newcastle Harbour, Marketown Shopping Centre, the university, light rail, the courthouse and the Honeysuckle precinct.

Many plans have been slated for the area in the past, including one for a government call centre and a 15-storey commercial and serviced apartment building.
The most recent proposal by consortium Newcastle First was to build a 14-storey apartment building with at least 25 units for affordable housing units and housing for people with disabilities but the deal was left in tatters in July this year after an agreement could not be reached on the final contract terms.

Under the previous proposal the HDC, which bought the land from a private owner in 2010, had agreed to contribute the land value (around $2.8 million) in exchange for 17 affordable housing units.

In addition, the City of Newcastle committed $2.9 million in cash from the Building Better Cities Housing Management and Development Committee in exchange for eight affordable housing units.

But these funding arrangements will not be in place this time around with the HDC intending to sell the site’s freehold.

When negotiations broke down earlier this year HDC General Manager Bob Hawes said: “As landowner, HDC has made every effort to structure a mutually acceptable contract for the delivery of a residential development on the site incorporating a number of affordable housing units.

“Although these negotiations were always going to be complex, they have reached an impasse and it is clear they will not progress any further.”

Although the site is zoned B3 Commercial Core and the floor space ratio is more profitable for commercial uses, it could potentially be used for apartments. HDC is known to back an element of affordable housing in any new proposal.

An HDC spokesman said: “HDC will not be mandating the inclusion of affordable housing and so does not have a target for this site. However, HDC is very keen to deliver more affordable housing in the city centre, in addition to the 170 units already delivered over the life of the Honeysuckle urban renewal project.”

Mr Hawes said of the Empire Hotel site: “HDC is determined to see a new lease of life in this site as soon as possible. It has great potential to be a big part of the wider revitalisation of the city centre, particularly in the West End.”

Interested developers have six weeks to submit their proposals.