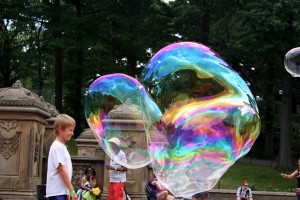 New figures released by Airbnb reveal the ‘sharing economy’ juggernaut so loved by tourists could be having a more serious displacement effect on traditional city residential rental markets than policymakers and local regulators had first thought.

Data released to the New York State Assembly and Senate by the company in February shows that ‘Hosts’ with two or more listings for entire homes account for a whopping 38 per cent of Airbnb’s revenue – despite the same people with multiple listings accounting for just 6 per cent of people who are offering whole homes up to stay in.

It’s a statistic so lop-sided that it jars badly with Airbnb’s user friendly public image as a platform that enables people who might not otherwise travel the opportunity to stay in an established home where people normally live, but occasionally rent out to make a little extra income on the side.

The meteoric rise and truly global scale that Airbnb has achieved is undeniable, but there now some hard questions being faced by those charged with running cities and they are not going away.

Authorities and policymakers in densely populated cities, where there is natural pressure on rental accommodation, have for at least a year been querying to what extent opportunistic landlords could be bypassing traditional leases to make far more money by exploiting demand for short term accommodation, where rates can be manipulated on a daily basis.

In the case of New York, the data released by Airbnb is part of its efforts to strike a ‘Community Compact’ with elected representatives there “to develop rules for home sharing that will strengthens [SIC] cities” and keep the company and its hosts on the right side of the law and regulations.

There are similar public policy efforts in other cities too, where signs of friction are emerging. And it’s not always going to plan either.

Airbnb’s efforts to influence policymakers to view it as a positive and open contributor to the local economy in New York came embarrassingly unstuck late last year after it was confirmed the company purged more than 1000 Entire Home listings from its platform – just before it released a statistical snapshot.

Critics – more on them a little later – claim that the weeding exercise artificially pushed down the proportion of hosts with multiple listings for Entire Homes in New York from around 19 per cent to just 10 per cent.

For policymakers and councils, the big question going forward is whether there will soon be a natural encroachment into the traditional residential rental market by speculative property investors and professionalised Airbnb hosts.

The so called Airbnb “effect” on rental availability and pricing is an issue that’s also starting to burn in Australian cities like Sydney and Melbourne as councils, strata companies and the property industry – as well as state legislators – try to figure out what is actually happening on their doorsteps, especially in unit developments.

In New South Wales a Parliamentary Inquiry into Adequacy of the regulation of short-term holiday letting in New South Wales has already attracted more than 200 written submissions and will commence public hearings in early March.

A real concern among councils and fire authorities is when flats are effectively converted into unlicensed short stay hotels, the number of people crammed into a unit can be far above permitted occupancy levels, like when as many as 8 people regularly bunk down in a two-bedroom apartment.

Thanks to the online and highly distributed and nature of Airbnb host’s activities – remember there are no actual addresses handed out until you book or contact a host – the biggest challenge for authorities and regulators is just getting an accurate picture of what’s going on.

But that could be about to change. Big time.

The same organisation that detected and exposed the manipulative purge of more than 1000 of Airbnb’s multiple listers in New York has set its sights on the NSW Inquiry and Australia and could soon flush out the data councils and policymakers here now find so difficulty to glean.

Founded by ex-pat Australian and now New York resident Murray Cox, ‘Inside Airbnb’ describes itself as an “independent, non-commercial set of tools and data that allows you to explore how Airbnb is really being used in cities around the world.”

Obviously Airbnb won’t tell you everything, but Cox maintains that there’s enough publicly available rich data out there because Airbnb’s listings themselves produce a pretty sophisticated snapshot of what’s happening.

One of the biggest challenges councils and regulators face is building a picture from what would otherwise be thousands of pieces of fragmented information floating around in a particular point in time.

Cox, who lives in Brooklyn New York, says he started Inside Airbnb as a self-funded project when he first started noticing debate about the impact of the platform.

What irked him was that despite all the passionate arguments, there was a paucity of actual data . So he started digging.

“I discovered that there might be data available that might tell the story about how Airbnb was being used in the city, and potentially impacting residential housing,” Cox told Government News.

Cox says he doesn’t charge for the data he compiles if it’s being fed into a public interest or transparency issue or debate. But if the data is being used for clearly commercial purposes, he uses that opportunity to fund the project and offset his infrastructure and other tech costs.

He argues that part of the problem for policymakers is that without access to data on Airbnb – and indeed other sharing economy platforms – the real evidence base for decision making can be opaque and thin.

“Often without the data you are relying on lobbying and sometimes marketing campaigns,” Cox says.

“I saw that there was no real data available in Australia or Sydney, I thought that my tool and my data could provide an impact on the debate and help forming good policy.”

Cox also maintains that communities, policymakers and regulators need to be up for an informed discussion about what effects so-called ‘sharing economy’ platforms could have on the mainstream economy including where and when undesirable market distortions occur.

In the case of the mainstream rental market, it can mean that properties – whole houses or units – in areas of high demand on Airbnb can become unregistered holiday accommodation where landlords and owners cash in on much higher nightly rates than traditional leases.

Sharing and caring … the algorithmic approach

While Murray Cox might be making a small amount of money slicing and dicing Airbnb data to offset his project costs, his venture pales in comparison to some of the highly sophisticated online services that feed off Airbnb’s success – and potentially exposes its underbelly.

It’s all very well being an occasional host who washes their own sheets, cleans and makes the bed but when you want to make the most out of your property, it can pay to go to the experts.

One of the companies raising eyebrows in cities is AirDNA, which tracks and analyses demand and pricing data across the world. While that’s not an issue in itself, some of AirDNA’s marketing pitches certainly aren’t directed at owner occupiers.

Under the heading of ‘Target Real Estate Investments’ AirDNA’s promotional material notes that:

“Many savvy real-estate entrepreneurs are buying up homes and condos in prime tourist locations to rent them full-time as vacation rentals. Verify how much short-term rentals are earning in over 4,000 neighborhoods across the globe and calculate how much profit they can generate over the course of a year. Property managers stand to gain with greater income and more reliable bookings.”

Another testimonial on the site from ‘David M’ is even more upbeat about buying investment properties based on Airbnb rentals.

“I bought the Vegas report even though we have 5 props there just to see how it compared to my 2015 income data and it’s pretty ******* accurate,” David M’s testimonial says.

“Based on that we’re gonna move forward on the investments that you recommended! Great work dude!”

Another company, Beyond Data, specialises in dynamic pricing – that’s where rates rise and fall based on demand – for Airbnb and other sharing platforms and spruiks increases of as much as 40 per cent when its algorithms are used to manage pricing.

That’s great news for hosts looking to maximise their returns, but it also puts Airbnb listings on a similar footing to hotels and airlines that use sophisticated pricing engines to maximise yield.

Murray Cox reckons that what he calls the “ecosystem” of service companies feeding off Airbnb is evidence that the platform is now at a size and scale it could well be having residential property market impacts.

Some of the effects he’s concerned about is a more heated housing market causing the evaporation of affordable properties and the depletion of stock as investors chase ever bigger returns.

Politicians and policymakers are meant to help the community deal with managing or controlling the consequences of such issues, but instead often find themselves standing next to tech companies to try and look relevant and up-to-date for voters.

Cox is naturally sceptical about how some politicians appear to want to harness to coolness factor that tech marketers appear to be able to imbue in the media.

“Embracing new technology is, for a lot of politicians, what they need to do to be relevant to their constituents,” Cox says.

“You can get a situation where companies have a negative impact on cities – but politicians are really trying to support that business.”

It’s something legislators sitting who are sitting on the Inquiry into Adequacy of the regulation of short-term holiday letting in New South Wales might keep in mind when taking evidence.

Public hearings for the Parliamentary Inquiry commence on 7th March 2016, in Tweed heads, with another public hearing in Sydney on 14th of March 2016.