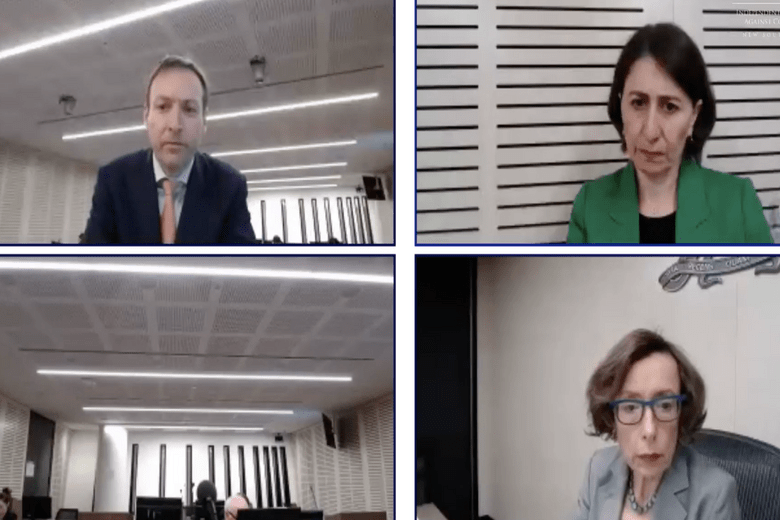 Former Premier Gladys Berejiklian was grilled about the contents of tapped phone calls at the ICAC.

The ICAC has been played an extraordinary series of private phone calls between the former NSW Premier and her ex-partner Daryl Maguire, including one in which he warns her about the commission’s phone tapping powers.

“They can tap into every phone conversation there is, absolutely unfettered power, no one has any privacy,” he is heard saying in the recording played on Friday.

“They could probably actually listen to any calls which were being made between me and this phone and any individual …. Including you.”

Ms Berejiklian says: “Is that going to be a problem?”

“Why? What have you done?” Mr Maguire asks.

“It’s all about setting you up and stinging you with their tail… who knows, Glad,” he said.

The ICAC is investigating whether Ms Berejiklian should have declared her relationship with Mr Maguire as a conflict of interest in relation to grants for projects in his electorate, and whether she should have reported corruption by the now disgraced former MP.

Ms Berejiklian repeatedly told the commission on Friday that she didn’t believe she had a conflict of interest and that she never suspected corrupt behaviour by Mr Maguire.

In one phone interception Mr Maguire complained to Ms Berejiklian about a lack of money for his electorate in the budget.

Ms Berejiklian is heard saying she spoke to the then Treasurer Dominic Perrottet about putting money in for Mr Maguire’s projects.

“I just spoke to Dom I said just put the (money) into the budget and he said no worries, he does what I ask,” she said

Counsel assisting Scott Robinson asked Ms Berejiklian  “do you accept you made contact with the then treasurer with a view to having changes made to the budget papers?”

“I can’t confirm that because I can’t remember,” Ms Berejiklian said.

‘No conflict of interest

Ms Berejiklian denied being influenced by her relationship with Mr Maguire in supporting a multi-million dollar grant for the a clay target shooting facility in Wagga Wagga, saying the main reason she backed it was to win back regional support after losing a seat to the Shooters Party in the Orange by-election.

“We’d just lost a seat to the Shooters Party and the government was very keen to demonstrate to regional NSW that we weren’t ignoring them,” she said.

Ms Berejiklain said the status of her relationship with Mr Maguire wasn’t suffient to declare as a conflict of interest.

She said they didn’t live together or share finances and he hadn’t been introduced to her parents or sisters.

Mr Berejiklian told the commission she didn’t believe Mr Maguire was engaged in corrupt conduct despite him telling her in 2017 that he might be able to get a deal done that would allow him to pay off $1.5m of debts, and despite her voicing concerns about him being involved with “dodgy” people in relation to property deals in Sydneys’s inner west.

The ICAC was also played tapped phone calls from 2018 where Mr Maguire and Ms Berejiklian discuss him being summoned to appear before the ICAC in Operation Dasha, which was investigating property deals in Sydney’s inner west.

Ms Berejiklian said she felt stressed for him and advised him to stay calm and not be ‘macho’ when he appeared.

“Two rules,” she said. “Be honest and listen to your lawyer”.

Mr Maguire said he was “calm as a cucumber” despite complaining about having to pay $10,000 for a lawyer.

He said he “must have killed a black cat and ten Chinamen and walked under a couple of ladders. What more can they throw at a bloke?”

Ms Berejiklian described his situation as a nightmare.

“What a nightmare, my goodness … but it’ll pass. The good news is Wednesday’s State of Origin.

In a subsequent phone call Mr Maguire said he could always live by a river in a bark lean-to.

“Wiith a swag,” Ms Berejicklian said. “But the bottom line is you’ve done nothing wrong so nothing to worry about.”

In another intercepted phone call Mr Maguire also rails against  transparency requirements which he says have turned MPs into “prostitutes and harlots”.

“Constituents use you every day… you bare you’re a**e to the world every day for people to raise funds for you, to come to your fundraisers, to f***g well vote for you, to man the booths.

“We’ve become … f***g harlots and prostitutes through no fault of our own, because rules of transparency, arm- length, of not talking to this person or that person, or bloody ICAC.”

Mr Maguire, who was in a relationship with Ms Berejiklian between 2015 and 2020, resigned from Parliament in 2018 after the ICAC heard evidence he sought payments to help broker deals for property developers.

He admitted in subsequent appearance in October 2020 he admitted that he used his position as a Member of Parliament and as a Parliamentary Secretary to make money for himself and his associates.