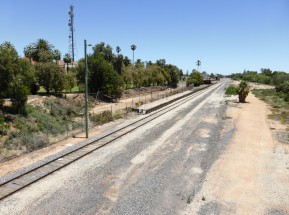 Australia’s century-long stop-start effort to standardise disparate railway gauges between its states has chalked up another incremental win.

The freshly elected Daniel Andrews Labor government in Victoria has come good on its election promise to allocate $30 million to commence stage one of the Murray Basin Rail Project, a move that will help agricultural producers and other regional industries like mining put more freight load onto trains rather than relying on trucks.

Rail investment might be have been shunted onto the slow lane federally, but recent changes in state governments now look likely to propel the issue forward.

Much of Victoria’s freight rail lines have for decades remained stuck on broad gauge tracks that are a different width to the standard gauge used by New South Wales.

The state’s latest move is part of a wider push by the rail industry as well as state and federal governments to finally create a national freight network based on the standard gauge that most manufacturers of rolling stock favour.

The allocation of money has won immediate strong support from the Australasian Railway Association (ARA) which said the Murray Basin Rail Project will help transform and align the Victorian rail system.

“The ongoing efficiency of rail in the agribusiness and mining supply chains is paramount in helping the economy and in ensuring farmers and miners can get their products to market quickly, efficiently and reliably,” said ARA chief executive Bryan Nye.

“The Project will also create greater efficiencies for rail moving in and out of Victoria’s major ports helping local industries stay competitive and support producers.”

Key parts of the project include converting the present broad gauge Mildura freight line over to standard gauge and increasing haulage capacity by upgrading the rail line to take 21 tonne axle loads.

“I hope to see a continuation of this sound commitment for freight rail from the Andrews Government, particularly through further standardisation of broad gauge freight lines in Victoria,” Mr Nye said.

The rail industry chief also backed the Andrews governments’ other commitments which included creating a Melbourne Metro Rail Authority and accelerating the removal of 50 dangerous level crossings in the state.