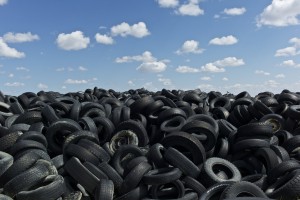 The ballooning menace of highly toxic and often illegal used tyre dumps sprouting-up across Australia could soon literally have the oxygen sucked out of it, all thanks to a small Australian start-up company that reckons it’s finally found a profitable way to recycle balding and broken rubber.

As state and local governments across Australia struggle badly to regulate and control the dangerous blight left behind by an often fly-by-night industry Melbourne based commercial innovator Green Distillation Technologies Corporation (GDT) has developed a process that heats whole end-of-life tyres from cars or trucks to finish up with highly marketable oil, carbon and steel.

The company’s achievement is no small feat given around some 25 million end-of-life tyres that are discarded by Australians every year, a large proportion of which end up illegally dumped, exported or stockpiled.

The technology is so cutting edge that GDT has become the first ever Australian finalist in the Edison Awards, one of the world’s top accolades for innovation, with the winners to be announced in New York on Thursday next week.

Like many economically critical but polluting industries, the big challenge for tyres has been creating an economically viable way to recycle products into commodity components that have a tangible value.

A primary reason massive tyre dumps appear is that they are simply not that easy to get rid of.

GDT Director Trevor Bayley said that end-of-life tyres were are a major problem for every government: they were built to be resilient, they can cause air, water and ground pollution and they can damage landfill linings as trapped methane causes them to bubble to the surface.

“It’s horrendous. The anecdotal evidence is enormous. The Environmental Protection Agency in Victoria has identified 27problem tyre stockpiles but they won’t say where they are or who owns them,” Mr Bayley said.

Mr Bayley said stockpiling was the biggest problem because the tyre retailers and collectors often did not normally care about what happened to the tyres.

He said roughly 23 per cent of tyres were recycled but this figure could include exporting tyres to burn in brick and cement kilns in “countries that don’t really care about their pollution” like Bangladesh, India and Thailand.

Methods of recycling, like crumbing or chipping, were too expensive to make the by-products from the tyres economic to sell, Mr Bayley said.

Unlike pyrolysis, oils created through destructive distillation do not separate, the steel remains untouched since it does not get hot enough and high purity carbon is released in powder form.

In addition, the process is emission-free, uses recycled oil as the heat source during production and the only waste generated is heat.

“A lot of people are doing similar things but this process is unique: we use the whole tyres. Some people have to chip their tyres and that involves a more complex process than ours,” Mr Bayley said.

Mr Bayley said the company had already had inquiries from organisations in Italy, the US, Romania, Japan, Singapore and Thailand.

The chief executive of GDT Craig Dunn is certainly not about to play down the valuable recognition that nomination for a global prize like the Edison award can bring to his business.

“We started in 2009 to prove our technology and the capability of the process, which represents the ultimate in recycling old tyres and more importantly generate a positive cash flow by selling the resulting carbon, oil and steel,” Mr Dunn said.

“It is the only process available in Australia that remanufactures the rubber from old tyres into a different energy form as the other recycling methods merely change the shape or appearance of the rubber.”

Mr Bayley said there was strong demand for all three by-products and GDT could sell their oil many times over.

Oil can be used by industry as a heating fuel, further refined into car or aviation fuel, used directly in some stationary diesel engines or blended with fossil fuel.

Carbon has a plethora of industrial uses, from toothpaste to electrodes and pharmaceutical goods, as well as being about 35 per cent purer than coal and burning hotter, while steel can be sold as scrap metal or returned to tyre manufacturers for reuse.

Mr Bayley said one Australian company, which imports two billion litres of fossil fuel and diesel a year, offered to take all eight million litres of oil the GDT plant in Warren will produce in one year. The Warren plant will be processing 19,000 tonnes of tyres a year – approximately 3 per cent of the end-of-life tyres that are generated in Australia each year – once it’s fully operational later this year.

GDT will also build two more plants in Australia: one in Stawell, Victoria and the other in Longford, Tasmania.

The technology could present a real boon for local councils, who do not generally accept tyres in collections and landfill any more but who suffer when tyres are dumped or stockpiled.

Mr Bayley said councils could take advantage of the disposal fee retailers charged to consumers when they bought tyres, by charging retailers a fee in turn to collect and recycle tyres. A regional council near Canberra has already signed up with GDT and a Western Sydney council was also considering signing a contract with GDT.

He said GDT’s technology could also benefit the police, Australia Post and government agencies that ran buses and the program already had strong support from the federal government.

The federal government has long recognised that that the build-up of tyres in Australia presents a serious problem. The federal government’s Tyre Product Stewardship Program attempts to make tyre retailers take responsibility for discarded their tyres in environmentally friendly ways. The program will also carry out audits, roll out an education program and develop stronger domestic markets for the by-products made through recycling tyres.

5 thoughts on “Has an Aussie start-up cracked how to make tyre recycling sustainable and profitable?”