A crowdfunding campaign to restore Pittwater Council and enable it to break away from the Northern Beaches Council reached 75 per cent of its target in a matter of days.

The campaign, led by newly-formed community group Protect Pittwater, aims to raise $10,000 through crowdfunding platform Chuffed. So far $7,125 has been raised and 58 people have donated since the campaign went live at 1pm on Tuesday this week.

Pittwater, Manly and Warringah Councils were the subject of a forced council merger and became the Northern Beaches Council in May 2016.

Ex-Pittwater councillor and retired barrister Bob Grace said the initial goal of $10,000 was enough for legal advice and a statement of claim.

“I think it’s really a super response and it shows by the number of people donating that the people out here in Pittwater want to go back, fight the government and get Pittwater back,” Mr Grace said. 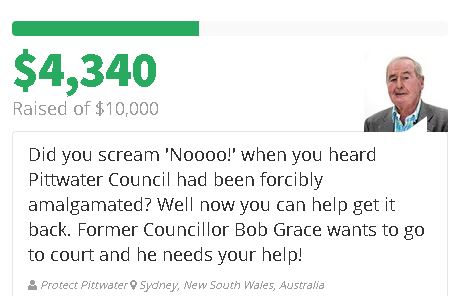 The campaign has been partly inspired by the recent success of Ku-ring-gai Council, which won an appeal against a forced merger with part of Hornsby Shire Council after the Court of Appeal found it had been “denied procedural process” and ordered the NSW government to pay the council’s costs in March.

Woollahra Council won a victory of sorts earlier in the High Court in May when it was granted special leave to appeal its forced merger with Randwick and Waverley Councils after losing its Land and Environment Court case in December 2016.

Another local residents’ group, Local Democracy Matters, has also been formed to fight the merger and is meeting this Saturday at Bondi Pavilion.

Both groups are considering their options and legal challenges are likely but NSW Premier Gladys Berejiklian has said she will press ahead with the mergers.