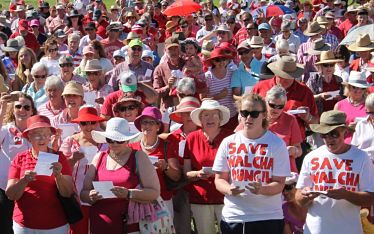 Three NSW regional councils will square off against NSW Local Government Minister Paul Toole in the Land and Environment Court at 11am  today in a desperate bid to prevent themselves being forcibly amalgamated with other councils.

Walcha, Oberon and Cabonne Councils have joined forces in an attempt to reverse the government’s bid to merge them with other councils.

Oberon is slated to merge with Bathurst Council and there is also a proposal to merge Cabonne with Blayney Shire and Orange City Councils.

Although Premier Mike Baird has backed away from sandwiching together Walcha and Tamworth, a merger between Armidale-Dumaresq, Guyra, Uralla and Walcha is still on the cards that the government has said it supports “in principle.”

Barrister Peter King is expected to argue that the state government has used the wrong part of the Local Government Act to pursue mergers, the part of the Act designed for voluntary mergers, not forced.

He is also likely to argue that there has been a denial of procedural fairness. This could include the state government’s refusal to release the full KPMG report, which provided the basis for the government’s contention that mergers will save $2 billion over the next 20 years, and whether the public inquiry process and consultation with ratepayers was fair.

There is a lot riding on the case. If it goes the wrong way for the government the judgement could provide ammunition for other councils taking legal action over the forced mergers, including Woollahra, Botany Bay, North Sydney, Ku-ring-gai, Hunters Hill and Mosman. Nine merger proposals are being held up by legal action.

Whether a council win – which would be appealed by the state government in a federal court and could end up in the Supreme Court – could wind back Governor David Hurley’s proclamation of 19 new councils earlier this month is debatable.

There has been speculation that the government’s haste to proclaim these new councils, which began operating on Monday last week, could be based in the desire to beat any court judgements which could have stymied the process.

It’s personal in more ways than one for Sydney barrister Peter King too, who is working the case pro bono.

His family come from Walcha and Mr King was the Liberal member for Wentworth until Prime Minister Malcolm Turnbull rolled him in an acrimonious preselection battle in 2004.

Mr King ended up standing against Mr Turnbull as an independent, earning himself a ten-year ban from the Liberal Party (for standing against a preselected candidate) in the process and re-joining the party only last year.

Meanwhile, Lane Cove Councillor Scott Bennison had a potentially important victory last week when he managed to score some cabinet-in-confidence draft documents in a challenge in the NSW Civil and Administrative Tribunal (NCAT).

The documents revealed more about the modelling KPMG used to arrive at the projected $2 billion the government said it would save over 20 years from merging councils.

They showed that the assumption of 3 per cent annual savings for metropolitan councils and a 1.5 per cent saving for regional councils were based on council mergers in Auckland in 2009 and Toronto, Canada in 1998, not more recent council amalgamations in Queensland in 2008 or those closer to home in Victoria in 1994.

It is expected that NCAT will direct the government to release more information in the coming weeks.