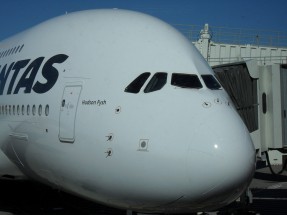 Australia’s Immigration and Border Protection authorities have revealed an accelerated plan for the rollout of new automated biometric facial recognition gates at Australian airports for outbound Australian passport holders and some travellers departing the country as part of $630 million counter-terrorism sweep.

Giving evidence before Senate Estimates hearings in Canberra this week, Australian Customs and Border Protection Service chief executive Roman Quaedvlieg said 92 of the new biometric departure gates would be deployed across Australia’s “major international airports” over the next 12 months.

The expedited rollout comes as security agencies move swiftly to try and curtail the departure of radicalised Australians trying to head to the Middle East to fight with — or sometimes against — the likes of Daesh and ISIS that the Prime Minister Tony Abbott has branded terrorist death cults.

The application of biometric passport checks at the international departure gates is highly significant because the technology has previously been primarily applied to checking that the faces of inbound passengers match the details on their passports.

Biometric facial recognition is a powerful tool for authorities because it has the capability to cross check and detect facial matches of people who may have obtained passports under different names or have previously come to the attention of authorities.

While authorities are loathe to disclose operational details of the systems, it is known that both federal and state police in Australia have been pursuing biometric photo capabilities — among other physical traits — as part of criminal records databases that are interoperable with other authorised agencies.

At a logistical level, the new biometric e-gates also free-up regular uniformed staff to perform other checks and reduce bottlenecks at airports by adding more capacity to process outbound travellers.

“We commence installation in July; it is an ongoing program. We are going to be quite aggressive,” Mr Quaedvlieg said of the rollout.

“We initially had planned to roll the gates out in two phases, but we have decided to bring that forward and try to roll out all of the gates quite quickly.”

The Department of Immigration’s Chief Information Officer, Matt Yannopoulos, told the Estimates hearing that it was expected that the rollout of the new smart outbound departure gates would take between 15 months to 18 months and had been allocated a budget of $18.6 million.

“It is dependent upon airport owners and having access to the facility because they are rather large pieces of equipment,” Mr Yannopoulos told the Estimates hearing.

“They have been on trial in Brisbane, so we have selected the model from Brisbane and they are being rolled out across the country over the next period.”

He said the new machines came from a company called Vision-Box.

However questions from Labor Senator Catryna Bilyk over potential security vulnerabilities of Australian passports used in the new systems — which are issued and controlled by the Department of Foreign Affairs – drew a firmly cool response from Immigration and Customs officials.

Asked whether microchip-enabled Australian passports were encrypted and could be “scammed”, Immigration and Border Protection Department chief Mike Pezzullo said the documents “have strong antifraud features.”

“Any issue around passport technology is best addressed to our colleagues in the Department of Foreign Affairs and Trade, who run Australia’s passport program. We obviously work with them,” Mr Pezzullo said.

“Secondly, if I could respectfully caution and counsel the senator. It is a program to move to chip-read passports that has been in existence for the best part of a decade under both governments.

It is our conventional practice to try not to, in public forums at least, give our adversaries any detailed clues as to how to get around antifraud features.”