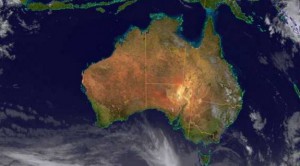 Australia’s Bureau of Meteorology (BoM) has made near real-time weather imagery of Australia from Japan’s Himawari-8 satellite available to the public, via a new web viewer.

BoM CEO Dr Rob Vertessy says Himawari-8 is the most advanced dedicated weather satellite in the world and that the benefits of the imagery to BoM and the Australian public are enormous.

“Himawari-8 is one giant leap in satellite meteorology: it’s like switching from black and white TV to high definition colour in one jump,” he said, announcing the new web viewer. “Or you could compare it to switching from the grainy images of the silent era to IMAX. You can see unfolding weather in detail we’ve only dreamed of in the past.

“But it’s more than just eye-candy for our forecasters. Himawari-8 generates about 50 times more data than the previous satellite. Our forecasters now have access to 16 observation wavebands that capture important detail from many layers of the atmosphere.

“Previously we received a satellite image just once every hour, now we get a detailed scan of our part of the globe every 10 minutes. It brings the conditions on earth to life. Combined with the coming upgrade to our supercomputer, Himawari-8 is a game changer. Weather computer models ingest data and extrapolate to provide a forecast. The better the data we put in, the better the forecast that comes out.

“Our forecasters are now starting to make use of the vast quantity of new data. One of the most immediate benefits is the ability to see storms as they develop. We expect to see continual growth in our use of the data over the coming years,” Dr Vertessy said.

New Minister for Cities and the Built Environment, Jamie Briggs, attended the launch on behalf of the Australian community. Japan’s Ambassador to Australia, Sumio Kusaka, attended as Japan’s representative.

Dr Vertessy expressed gratitude to the Japan Meteorological Agency for making the data from Himawari-8 freely available to Australia.

“There is a wonderful tradition of global cooperation in meteorology. The Japan Meteorological Agency is making a big investment in Himawari-8, close to a billion Australian dollars, and the Australian community can share the benefits. We are extremely grateful for the excellent relationship we have with our counterparts in Japan,” he said.

The public can view Himawari-8’s images via the new BoM web viewer, which Dr Vertessy will go through a period of testing, feedback and improvement after the initial release today. The viewer can be found on the Bureau’s website: www.bom.gov.au/australia/satellite

“This is a great day for the Bureau of Meteorology and all Australians who have an interest in weather. Now everyone can benefit, both by seeing the weather as it unfolds in fantastic detail and through the improved services it will enable,” Dr Vertessy said.

The 3.5 tonne Himawari-8 was launched from the Tanegashima Space Centre, located off the southern Japanese island of Kyushu, in October 2014. ‘Himawari’ is the Japanese word for ‘sunflower’.

It uses a 16 channel multispectral imager to capture infrared and visible light images of the entire Asia-Pacific region from its geostationary orbit just north of the West Papuan capital of Jayapura.