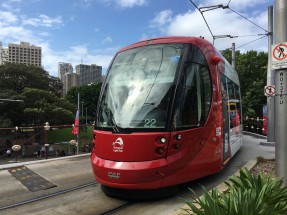 Thousands of enterprising Sydney commuters chalking-up $2 million a year in ‘free’ Opal trip value on Transport for NSW’s equivalent to frequent flyer points are about to be derailed and un-rewarded, all thanks to changes to the popular smartcard ticket that hit Monday.

After more than a year of successfully milking a free trips incentive to extract Opal network-wide travel for as little $18 a week, commuters participating in so-called ‘Opal-running’ have been warned a crackdown on the short-hop journeys they use to game the free travel reward will now force them to travel at least twice as much before they make their quota.

It gives Opal card commuters free travel after eight paid journeys, largely based on the assumption that commuters heading to and from work will space out their travel and pay for the vast majority of what they use.

But the pursuit of the free transit prize among eager commuters on Mondays quickly escalated into something between a sport and a cult among inner city passengers, who have increasingly clocking-up extra journeys wherever possible to reach the free fare target, especially on the Light Rail within the CBD.

If you travel at full peak fare from the outer suburbs, it makes a lot of financial sense to chalk-up lots of the cheapest short journeys first day of the week and then travel free.

‘Cheating’ still not illegal
Although not illegal, NSW Transport Minister Andrew Constance has accused those milking the fare system of ripping off other commuters and the government by “running, cycling, driving or even roller-skating between train stations or light rail stops to tap on and off.”

Put another way, the NSW government is primarily worried about the financial hit and wider inequity that Opal fare gamers are apparently creating, given it can’t actually prosecute anyone for jumping on a tram or train with a valid ticket.

“It’s unfair that customers doing the right thing and paying to actually use transport are being cheated by people who are using their own or other people’s cards to artificially inflate their journeys. Some are even using the practice as a business model to earn money,” Mr Constance said.

However the Labor Opposition’s Shadow Transport Minister, Jodi McKay isn’t impressed by the Opal crackdown and has accused the Baird Government of sending conflicting signals to commuters.

Ms McKay said that in 2014, despite the government being alerted to the problem, then Transport Minister Gladys Berejiklian had encouraged commuters to game the system.

“They have known about this for a very long time and are only now doing something about it,” Ms McKay said.

“It is a complete contradiction – one Transport Minister saying ‘hey beat the system’ and then the next one saying ‘no,  don’t … and we are going to make it harder.”

Ms McKay also questioned why Mr Constance had asked for more time for the Government to respond to an Independent and Regulatory Tribunal (IPART) analysis of public transport fares which she said could see some commuters slugged as much as $950 extra a year.

“They know how unpopular this whole thing is, but have given no explanation for the delay,” Ms McKay said.

Rorting epicenter
The epicenter of the present fare rorting problem appears to be in downtown Haymarket and Pyrmont where Light Rail stops are just a few hundred metres apart, making it easily time effective to clock-up Opal taps by walking between stops.

Transport sources have told Government News Transport for NSW could disable the Opal readers at light rail stops until just before a tram arrives, but this would then increase ‘dwell times’ and slow down the service, especially during peak times.

Government News has also observed some passengers even opportunistically tapping-off on one reader and then tapping back on during the same journey in an effort to accrue journeys, although it’s unclear how effective this actually is.

To back his case for the crackdown Mr Constance on Monday released statistics that showed a whopping 63,636 journeys on the light rail made between Star City Casino and Pyrmont Bay on Mondays compared to just 1469 journeys on Wednesday between 1st February and 6th March this year.

Mr Constance’s statistics reveal trips between the Inner West heavy rail stops of Erskinville and Macdonaldtown chalked-up 6465 journeys on Mondays in the same period, an impressive piece of footwork considering the stations – which are only 470 metres apart – are on completely different rail lines.

Not-so-quick fix
The NSW Government’s solution to opportunistic fare gaming, although cloaked in transport jargon, has been to dramatically increase the number of taps on-and-off needed to qualify a trip as a ‘journey’ within a given hour on any mode of transport.

In a nutshell, this means that commuters who were chalking-up trips by tapping on-and-off three times in one hour will now have to do so seven times before their taps qualify to be counted towards the ‘Weekly Travel Reward’.

However the deliberate limitations the solution revolves around are certain to propel debate about whether a much greater number of semi-regular commuters will soon suffer to dissuade a relatively small group of opportunists.

A longstanding gripe about Opal’s fare structure is that fares are individually charged across each discrete mode of transport when a commuter combining different services to achieve a single journey.

For example, a trip from the Leichhardt in the Inner West to Cremorne on the North Shore could involve Light Rail, Rail and a Ferry and also potentially Bus with a commuter being charged for each transport mode, rather than for a single journey.

Many public transport advocates believe that authorities should charge commuters based on just the distance between two points of a journey to encourage commuters to more easily swap modes without being penalized.

One potential benefit of that system is that transport authorities could use price signals to better balance passenger loads between modes with less utilized services discounted to take pressure off crowded ones.

Another option is to use price signalling to smooth out peak demand, with commuters being offered either discounts or rewards for helping to take pressure off the system.